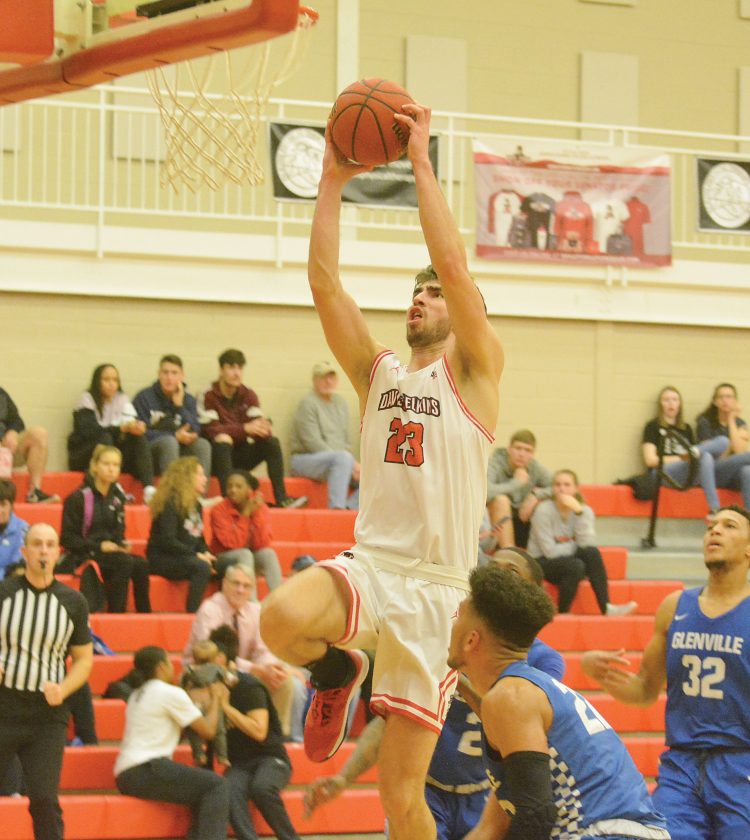 The Inter-Mountain photo by Edgar Kelley Davis & Elkins’ Erkam Kiris goes in for a dunk during Wednesday night’s MEC victory over Glenville State at the McDonnell Center.

ELKINS — Davis & Elkins College rallied from eight points down in the final five minutes of regulation to capture a 79-73 win over Glenville State College Wednesday night in Mountain East Conference action at the McDonnell Center.

The Senators (5-10, 3-6 MEC), who snapped a six-game losing streak with the victory, trailed 70-62 after the Pioneers’ Phil Bledsoe sank a pair of free throws with 5:29 remaining in regulation play.

Donte Doleman drew D&E to within four, at 70-66, after knocking down a short jumper in the paint and a pair of shots from the charity stripe with 3:53 left.

After Bledsoe hit 1 of 2 shots from the foul line for the Pioneers, a Doleman 3-pointer trimmed the visitors’ lead to 71-69 with 3:19 remaining in the game.

A jumper from Bledsoe on the other end pushed the Pioneers’ lead back to four points, but an Erkam Kiris score in the paint and another trey from Doleman gave D&E the lead for good, at 74-73, with 1:23 left to play.

The Senators connected on 5 of 6 shots from the free- throw line down the stretch, while holding Glenville State scoreless during the final minute of play.

Doleman, who fueled D&E’s comeback with 13 points the final five minutes of play, finished with a game-high 31 points.

Kiris added a double-double with 20 points and 12 rebounds. Myles Monroe also reached double digits for the Senators with 15 points.

Bledsoe paced the Pioneers (8-7, 5-4), who led 43-36 at halftime, with 21 points and nine caroms. Hegel August followed with 19 points and seven boards, while Noah Frampton scored 11 points and dished out seven assists.

Davis & Elkins will return to action at 4 p.m. Saturday at Concord.