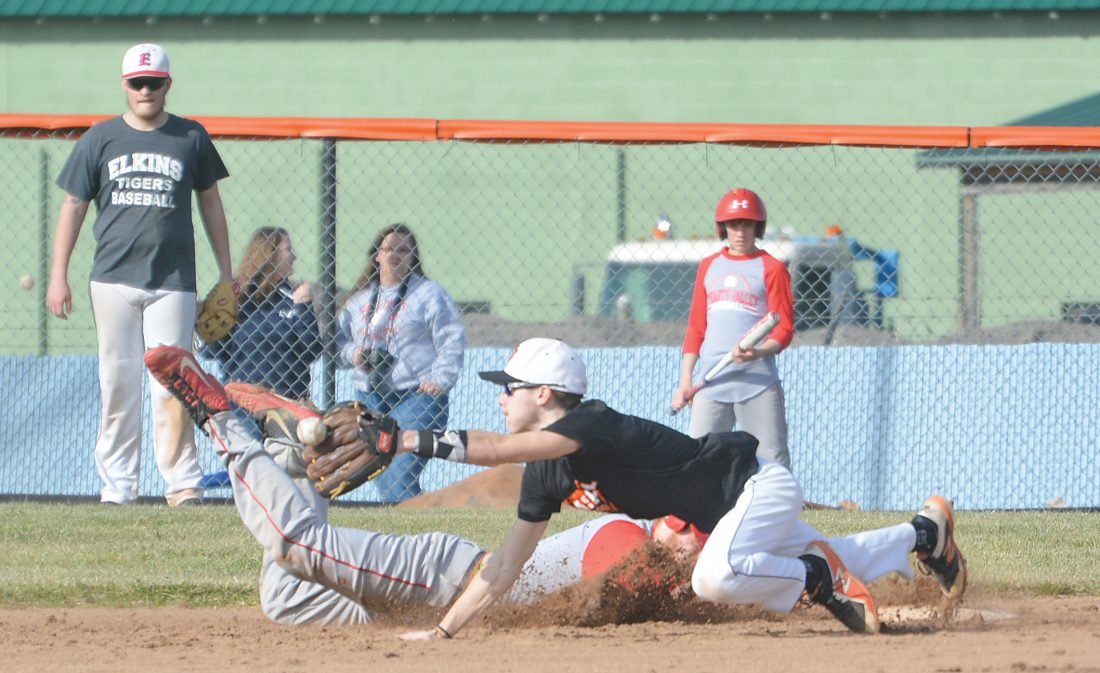 The Inter-Mountain photo by Edgar Kelley Before the decision to halt high school games and practices on Friday due to coronavirus concerns, Tygarts Valley and Elkins took part in a baseball scrimmage on Thursday. All springs sports — baseball, softball, track and field and tennis — are postponed until April 10.

ELKINS — Following suit with the postponements of the boys and girls state basketball tournaments, high school spring sports became the latest casualty of the coronavirus concern on Friday.

West Virginia Superintendent of Schools Clayton Burch announced on that prep baseball, softball, track and field and tennis games and practices are postponed until April 10.

The decision will be re-evaluated before April 10.

“We are hoping that on April 10 that things are more under control and we can pick up things from that point in time,” Ware said. ” We are aware of the problems that this might create for our students who were looking forward to participating this spring, especially those that are seniors.

“Everyone will be kept up to date as more information becomes available. This is a fluid situation that is changing almost minute-by-minute, and Elkins High School appreciates everyone’s understanding and patience in this.”

High school games were scheduled to get underway next week.

Ware added the annual Toughman Contest, which was slated to be held at Elkins High School this weekend, was also postponed.

The event is expected to be rescheduled at a later date.

The girls state tournament was postponed at the conclusion of Thursday afternoon’s Class A quarterfinal game between Tucker County and Parkersburg Catholic at the Charleston Coliseum and Convention Center.

All six games of the tourney were played on Wednesday.

WVSSAC executive director Bernie Dolan indicated at a press conference on Thursday he’s hopeful the tournaments can be rescheduled, but there is no timetable for making that decision.

“We don’t know where the virus situation is going to take us,” Dolan said. “We’ve been watching and working with people to try and figure it out.”

Gov. Jim Justice also announced on Friday that all schools in the state were being closed indefinitely.

Area Little Leagues will not resume practices until at least April 6, while the Elkins Elks Babe Ruth tryouts slated for March 28 are expected to be moved to a later date.

Sign-ups for new players ages 13-15, however, will still be held from 1 to 4 p.m. today at Robin Harvey Memorial Field.