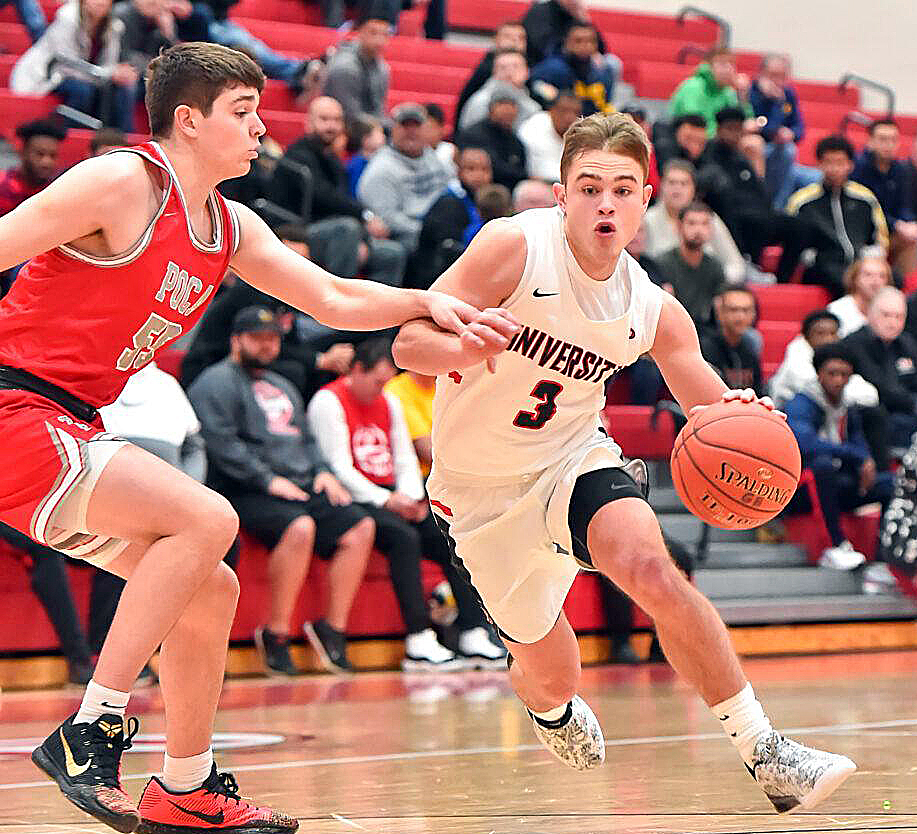 MORGANTOWN — There wasn’t much doubt that the No. 1 University High boys’ basketball team (22-3) was favored to return to the Class AAA finals this year, but with their season now in limbo, it’s expected seniors K.J. McClurg and Kaden Metheny won’t suit up in their high school uniforms again, their senior season effectively over due to the coronavirus pandemic. Regardless of the what-ifs, McClurg and Metheny aren’t leaving UHS empty-handed. Both were named first team all-state Friday by the West Virginia Sports Writers Association, solidifying their careers at University on a high note.

Four years ago, Metheny and McClurg stepped onto the court at UHS for the first time. Since then, they’ve led University to one title and potentially another.

Greatness hasn’t escape the pair who have been intertwined with each other since they were in 5th-grade. In 2019 the duo helped University win its first Class AAA state title with a victory over then-No. 1 Martinsburg. This year, the Hawks battled some of the best teams in the country, nearly beating the highly-touted Arizona 5A state champion Millennium High in Myrtle Beach, S.C., losing 65-63.

It was the Hawks’ first loss of the year and was immediately followed by their second, a 79-73 defeat at the hands of Beach Ball Classic host Myrtle Beach who is a powerhouse in the Palmetto State. But when things looked bleak, Metheny and McClurg rallied the troops and UHS took off once more, going on a four-game win streak which saw tight wins over Morgan Park (Ill.), rival Morgantown and Kennedy Catholic (Pa.).

The streak was eventually snapped by Morgantown Jan. 15, another two-point loss reminiscent of the loss to Millennium, in which Metheny and McClurg combined for 42 points, with 32 and 10 points, respectively. That loss was a brutal reality check for the Hawks, knocking them out of the No. 1 spot in the West Virginia Associated Press Poll. It was a check coach Joe Schmidle remembers it well.

“The Morgantown game was a wakeup call,” he said. “As much as any coach or any kid hates to say it, I think there was some complacency, and they needed it. I don’t think they were working hard enough in practice, they weren’t taking things seriously enough and, you know, when that happened it got us focused. Not just the kids, but for me, too, and we needed to do some things to get better.”

Schmidle noted that even Metheny and McClurg weren’t immune to the reality check, as each player had to win their spot in every single practice following that night.

“It absolutely did,” Schmidle said. “They all knew that one thing about us as a team is there’s open communication. I talk and communicate with my players because I want feedback from them. They know who’s playing the best, they know who they trust and what do they think we need to do. It can happen during a game or in a casual conversation during the school day. The bottom line is, those guys are competitors and even though they have loyalty to their brothers that they’ve been playing with, they still want to win. They want the best talent on the floor that will get them a win.”

And with that loss behind them, six days later, UHS downed Parkersburg South on the road by 12 points, before dropping 109 points on John Marshall four days after that. In fact the Hawks never lost another game, winning them all by comfortable margins.

While they may not get a chance at repeating for the title, Metheny and McClurg were recognized for their outstanding seasons with first team all-state honors. However, the end goal still feels unfulfilled.

“It’s an amazing accomplishment and it’s special to share that with K.J., but I think I can speak for both of us that we wanted to end the year as state champions, not first team all-state,” Metheny said. “We wanted that team accomplishment. But it’s definitely amazing to share it with my brother and teammate. We’ve been the one-two punch together over the years. With the season ending like it did, it’s hard, but we know there’s a reason for this. God has a purpose and He’s going to redeem it, but we have to try and find every positive out of this. It’s been an amazing year. We accomplished so many things and this is a team I’ll remember and cherish for the rest of my life.”

“It’s great to know that we went out with a bang,” McClurg said. “It didn’t go how we wanted it to, but everything we worked for up to this point, it shows that the work we put in paid off. We’re blessed to be in the situation we are at UHS. I want to thank my coaches, teammates and parents for pushing me.”

Metheny, named first team captain, snapped two major school records this year. He first overcame current-Milwaukee Brewers infielder Jedd Gyorko’s all-time 3-point record during the Hawks’ routing of Wheeling Park in the OVAC semifinals, surpassing the former Hawk with his opening trey to take the No. 1 spot. He then hit his 2,000th-career point in the Hawks’ sectional finals win over Morgantown, a game where he was just shy of the school’s single-game scoring record (Duke Pride, 53 points) with 44 points. Further, he averaged 24.9 points, 4.1 rebounds and 4.4 assists per game.

“I’ve played basketball my entire life and I’ve been blessed with so many things through this entire journey,” Metheny said. “It’s all from God, first and foremost. Going into UHS as a freshman, I never would have thought I’d accomplish this many things. It’s a true testament to the hard work I’ve put into the game of basketball. To see what it’s panned out to be is truly amazing, but I wouldn’t have been able to accomplish those things without my teammates, coaches and trainers.

“For coach Schmidle to be able to rely on me going in as a freshman and make me a starter as a freshman, he truly believed in me and I’ll cherish that for the rest of my life. He’s been the best coach I’ve ever played under and we’ve created a coach-player bond that is inseparable. All these accomplishments are humbling. For everything that I’ve done as a kid out of Morgantown, I hope that I can set an example for the younger kids coming up that you can be someone coming out of this city and you can accomplish so many things.”

Metheny signed to continue his career at Bowling Green.

Though one can easily be overshadowed by such a talent as Metheny, McClurg stood out just as much among his comrade. He was the second in line in scoring, rebounds and assists, averaging 20.3 points, 4.8 boards and 2.8 assists per game.

McClurg credits his success to a stifling defense as a bigger-bodied guard and becoming a leader early on in his junior year.

“We’ve always had scorers and players that can just play, and I’m always driven to win,” McClurg said. “I really give it all defensively. I think I’m one of the better defenders out there. Rebounding, I’m a bigger guard so I do my best. And leadership [which] nowadays is critical. Last year we had two seniors so someone had to step up and I think Kaden and I really stepped up as leaders on and off the court.”

McClurg’s game improved from athlete to player over the years.

“Since 5th-grade I was always out of control. I wasn’t really skilled around the perimeter, I was always one of those kids who was a football player and transitioned into driving to the hole and using my body and strength to finish at the hoop,” McClurg said. “As I grew older I started working out with Kaden and other guys who were guard- and perimeter- oriented, so ever since high school I’ve been working on both parts of the game, even midrange. It’s hard to guard someone who has all three.”

And while Metheny has been a long-time commit to Bowling Green, McClurg is still weighing his options, though he’s close to choosing a college. After pulling out of a commitment to Niagara following Patrick Beilein’s resignation in October, McClurg opened his recruitment once again. He’s currently being pursued by multiple programs, including offers from New Hampshire, Navy, West Liberty and Nova Southeastern, plus interest from Rider, UMBC and UNC-Asheville.

Though the future holds promise for the duo, it also brings emotions to their coach.

“They’ve made me look really good as a coach, I can tell you that. I get a lot of credit for things because of those two.”

Morgantown’s leading scorer Carson Poffenberger found a spot on the second team after entering the season doubted by many. Taking over the center spot from Nick Malone, the 6-foot-7 Poffenberger was outstanding on both sides of the court, shattering all expectations. He averaged 12.9 points and 5.5 boards per game. The rest of second team is captain Rodney Toler (St. Albans), Ben Gilliam (Woodrow Wilson), Sheldon Everhart (Hedgesville), Amare Smith (Huntington), Telryn Villa (Martinsburg), Sam Potts (Parkersburg) and Richard Law (Woodrow Wilson).