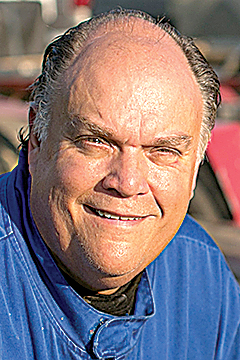 Rain, rain and more rain was the story of the weekend. The wet stuff has postponed Test-N-Tune at Elkins Raceway until this Friday evening. Gates will open at 6 p.m. and once again hill admission will be free, and there will be a small charge for pit entrance due to insurance costs.

Rain also played havoc with the scheduled NASCAR events at Bristol Motor Speedway in Tennessee. Most of the practice and all of qualifying was washed out on Friday. This caused both the Xfinity and Monster Energy Cup drivers to start their races by the point standings. Track management had used a traction coating by VHT company to enhance the grip in the corners down low and try to open up multiple lanes of racing. Bristol is very familiar with this product because it is used to enhance traction at the starting line at Bristol Drag Way.

On Saturday, skies cleared long enough to get in the Fitzgerald Glider Kits 300. Rain caused a delay in the action during the event. In the first stage of the event, Cup star Kyle Larson drove to victory. Then in stage two, Xfinity regular driver Daniel Hemric drove to victory and finally grabbed the 10 bonus points and the important play-off point.

This race was also an Xfinity Dash for Cash event so there was a $100,000 bonus up for grabs to the highest finishing Xfinity regular driver. Cole Custer and Justin Allgaier made themselves eligible in the first stage. Daniel Hemric and Brendan Gaughan moved on from stage two. Daniel Hemric left the mountains of Tennessee $100,000 richer, winning the Dash for Cash Prize in the final run down by finishing fifth overall behind a class field of Monster Energy Cup drivers. Erik Jones pulled the old bump and run on Ryan Blaney in the closing laps and Grabbed the victory. Blaney held on for second. Daniel Suarez finished third. Elliott Sadler finished fourth, but had not qualified for the Dash for Cash money. Hemric rounded out the top five. Cup star Kyle Larson battled back from a penalty on a pit stop to finish seventh.

On Sunday, there was actually flooding around the speedway and rain washed out the event completely. The race was rescheduled for Monday afternoon. Points leader Kyle Larson led the field to the green flag and drove away to win stage one. On the restart Martin Truex Jr. took the lead and appeared to have a car to challenge for the victory.

As the race wound down the Lowes Chevy of Jimmie Johnson got better and better. He was able to drive away to the victory by a comfortable margin. Yawn, I’m sorry but I mentioned it last week and it rings true this week. Jimmie wins and it’s a snooze fest.

Clint Bowyer nabbed his first second0-place finish in a long time. He was excited but disappointed he couldn’t quite catch the 48 car. Teammate Kevin Harvick put his Stewart-Haas racing Ford in third place. Matt Kenseth had a fast car in the closing laps but it was too little too late and he finished fourth. Joey Logano rounded out the top five. Pit road penalties ruined the hopes of Kyle Larson and Martin Truex Jr., who fought back to sixth and eighth place finishes respectively.

On Tuesday of this past week it was announced that Dale Earnhardt Jr. will retire from Monster Energy Cup competition at the end of the 2017 race season. He may follow his fellow retired Hendrick Motorsports driver Jeff Gordon into the broadcast booth. S

peculation is swirling about who will take over the famous 88 car next season. Carl Edwards’ name keeps popping up along with Alex Bowman and William Byron. Nothing has been officially announced as of now. It will need to be a very talented and sponsor-friendly driver since Dale Jr. has been named most popular driver by the fans for the last 14 years. Junior Nation is a force to be reckoned with in promotional value and race attendance.

He plans to continue as a car owner in Xfinity and the Camping World Truck series and continue to promote and cultivate young talent.

Wow, what a week! Hope the weather is better for Test-N-Tune and hope to see each of you there Friday evening. Until then I need to be in the garage because at the end of the straightaway there’s always Another Left Turn.

The leave of absence I had to take from this “Outdoor Column” was longer than expected due to complications ...