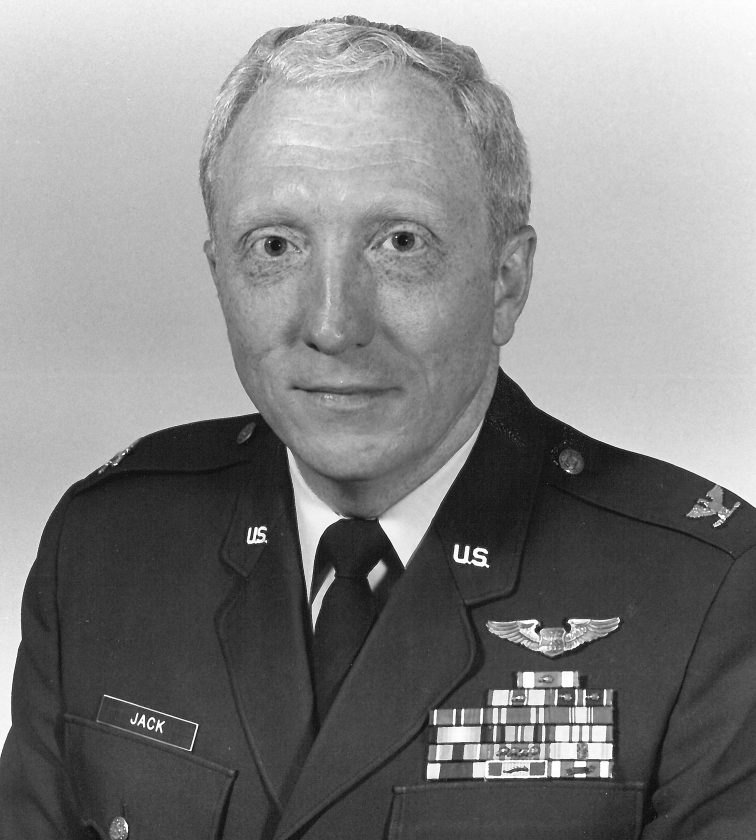 ELKINS — Proud Elkins native Tharon L. Jack, an alumnus of Elkins High School and Davis & Elkins College, has dedicated a large portion of his life to serving his country.

Jack served 30 years in the U.S. Air Force, beginning in 1961 and ending in 1991. Throughout his career, he said he approached his job with love, gratitude and dedication.

“I loved all of it!” Jack said in a recent interview. “I had a very, very interesting career because I didn’t follow the normal career paths. I spent a lot of time doing different things. Most people who were in the military would get into one career field and stay there. I didn’t!”

The beginning of Jack’s military career coincided with the ramping up of the Vietnam War.

“I was in college in the late 50s and 60s, just at the start of Vietnam. You knew that after you finished college you were probably going to get drafted,” he said. “So, you had the option of going through a commission program, like I did with the Air Force ROTC at D&E, or as several of my friends did, they went through the Marines OCS program or the Navy OCS program. The other option was getting drafted and enlisted. I graduated from college in May of 1961 and was commissioned on June 5, 1961.”

Jack worked his way up over the years, earning the rank of colonel.

“Being a colonel involved many things. My responsibilities were mostly staff work, involved with planning and working with the Air Force combat staff and command structures,” he said.

Jack’s service included traveling across the United States as well as overseas.

“I served in Texas a couple times, and I was in South Carolina, Georgia and Pennsylvania. Those were my primary duties,” he said. “I also had the opportunity to fly overseas and do a lot of things like that.”

During his time in the Air Force, he completed many different assignments.

“My first assignment was to navigate and train at the James Carl Air Force Base in Texas. That lasted for a little over a year. When I finished my flight training, I received my assignment to a squadron in the Dallas Air Force Base in South Carolina,” Jack said. “We flew some 124 aircraft and had a world wide mission. I was in the group that was directly involved in the Cuban Crisis.

“I also worked with the Navy on Operation Deep Freeze down in the Antarctic and in New Zealand. When I finished that assignment, I went to a nuclear weapon school that was out in Shepherd Air Force Base in Wichita Falls, Texas.

“Then after going through nuclear weapon training, I was assigned to the 548th Strategic Missile squadron at Forbes Air Force Base in Kansas,” Jack said. “I was an ICBM, which is short for Intercontinental Ballistic Missile, Combat Crew Commander. Later on I was also section chief. We worked a lot with nuclear war head missiles and had the opportunity to go out to the west coast and fire the missiles every once in a while. That was really a blast!

“My first assignment in the reserves was with the 84th squadron in Greenville, South Carolina. I was the executive officer of that squadron and after a year or two there, I went to the 911th airlift group up at the Pittsburgh Airport. We flew C1-24s and later on we flew C1-30s. We had a world wide mission so we flew all over the world, mostly in support of Vietnam.”

Following the completion of those assignments, Jack earned the rank of lieutenant colonel.

“When I made colonel, I was assigned to a 14th Air Force Base. I was in the group that did the nuclear biological and chemical (NBC) training for all of the reserve units in 14th Air Force. This covered most of the Eastern United States, also known as the reserve units,” Jack said. “My assignment after that was at the headquarters Air Force reserve where I did some planning and programming for special projects. My final assignment was at the headquarters forces in Fort Mcpherson, Georgia. That was a joint service task force assignment.

“At that assignment, we were responsible for identifying all of the individual service requirements and responsibilities in response to the military support for civilian authorities. Also, we were responsible for military support for civil defense. This was kind of the precursor to Homeland Security,” he said. “I worked with the Air Force combat operation staff and we operated with the commander whose chain of responsibilities were five numbered armies. So, once we got through the organization phase, I was responsible for the Mid-Atlantic region, which includes Third Army headquarters over at Fort Meade, Maryland, and the general staff for the different states in the Mid-Atlantic region. That gave me opportunity to work with the state of West Virginia Army and National Guard headquarters.”

Thirty years of service to his credit, Jack retired from the Air Force. He then moved on to accomplish other tasks, working for various organizations and companies.

“I retired from the Air Force July 4, 1991 as a colonel with 30 years and 30 days of service. I loved every part of my job. It was very diversified and I did a lot of things that other people don’t get the opportunity to do. It was a privileged to serve my country and I loved every minute of it,” he said.

After his service, Tharon worked in South Carolina as a college administrator. When he returned to Elkins, he went to the 911th Airlift Wing, based out of the Pittsburgh Air Reserve Station at the Pittsburgh International Airport.

“I am still in contact will a lot of my old military friends,” he said. “Some of them I even went through D&E with, and others I met along the way.

“I have a wife, Judy, who is a retired teacher from Elkins High School. We have three children. They all grew up here. We have 13 grandkids and five great-grandkids.”