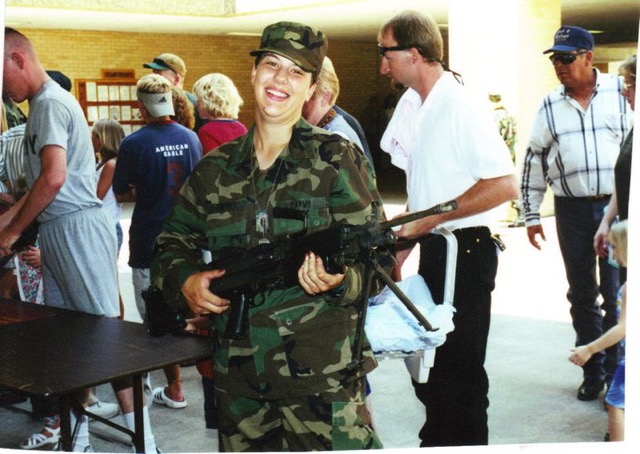 Submitted photo Marcia Myers, of Elkins, served in the Army National Guard from March 1999 to November 2003. During her service, she achieved the rank of specialist.

ELKINS– Inspiration can be found in both the small events and the life-changing experiences that one accumulates through the course of a lifetime. All it takes is just a moment of committed bravery to transform one into the person he or she will become.

Marcia Myers, of Elkins, served in the Army National Guard from March 1999 to November 2003. During her service, she achieved the rank of specialist.

“I was a senior in high school,” she said. “It kind of started as a joke. I took the test with somebody else and I got in but the other person didn’t. It was a good experience, that is how I got most of my college paid for.

“When I first took the test I was like, ‘No I’m not going to do this.’ Then, once I passed and got in I thought about having my college paid for. I went to D&E for four years and came out with an accounting degree and no debt. How many people can say that?”

Myers said that, during basic training, she went through many trials, but came out with a new perspective.

“Lots of running, sit-ups, all that horrible stuff. I get to reception and we have a PT test before you can even start basic and I sprained my ankle, so I failed my very first PT test. I had to stay in reception for an extra week and that was really hard because I was like, ‘I’m ready and I’m excited but I’m stuck,'” she said.

“I had never really been away from home. I also found out I was pregnant with my son three weeks after I enlisted, so I had to put off my basic training for an extra year. I ended up not going to basic until 2000. Jeremiah was about 6 months old when I left. I finally get in there and it was like nothing I have ever been through before. The pace, everything was fast, but we learned how to shoot and throw grenades,” Myers said.

She noted that she made some close friends during her service.

“There was one girl, we met the first night at reception,” she said. “It was terrifying because you get off the bus at like 3 in the morning and you have to dump out all of your stuff and they are screaming at you. We were battle buddies, so a battle buddy is somebody that you have to stay with. The two are responsible for each other. When I sprained my ankle, she went on and I didn’t, which was really hard.

“One of the first things that they issue you is a book that has all of this stuff that you have to memorize. So she took my book and wrote on the back of it. It says, ‘Never be discouraged when failures come to light, Just use them as stepping stones and make a stronger fight.’ That was kind of my motto to get through basic,” she said. “We would write each other back and forth. Of course she was in a different place when I got there. The really cool thing is that when I walked into training at Fort Lee, a year later, she was there. We connected again and supported each other. She was one of my best friends. That motto for me is one of those things that even now, 20 years later, I can use and still live by.”

Myers was not only in the military, she was a mother, spouse and student.

“I was a single mom, just out of high school. My parents were phenomenal. I wouldn’t have been able to do it without them. They kept Jeremiah for two summers, 13 weeks each summer while I was gone,” she said. “I struggled in basic. I wanted to be home, I missed my kid, I missed my family, it was hot, and I have never been super physically fit, so I struggled a lot in basic.

“My one drill sergeant pushed me and pushed me and pushed me. She told me, ‘You have to do this for your kid. You are a mom, this is for your kid.’ So, I talked to my parents right before my final PT test and they told me that if I passed, they would come to my graduation. My parents drove 19 hours with a 9-month-old to my graduation from basic training. I had to keep him in my head to get through it all.”

Myers marvels now at the amount of activity she was engaged in during the four-year span.

“While I was in, I was in college full-time, a mom, I worked part-time at Long John Silvers, and was in the National Guard,” she said. “I graduated college on time in four years. I had my son my first semester of college and went through all of that at the same time. I also got married when I was in college.”

She said her children now enjoy hearing about her training experience.

“My kids love when I tell the story of going through the gas chamber. They put you in this big room, line you around the wall, and you are in your gas mask, they fill it with gas, and you have to take off your mask and sing. We had to sing the Star Spangled Banner, or whatever they told us to sing, so you aren’t standing in there holding your breath,” she said. “When you go out, your snot is down to your knees and you are throwing up. It was really gross.”

Myers was stationed at a base in Buckhannon, where she was an automated logistical specialist.

“I was never deployed overseas. I was based at the 119th engineering unit in Buckhannon. It is a detachment from the Clarksburg unit. I was there for the entire four-and-a-half years,” she said. “For basic I was in Oklahoma at Fort Sill and then for AIT, which is the tech school, I was in Fort Lee, Virginia.

“In National Guard, you are there one weekend a month and two weeks during the summer unless you are called out. I was a 92 Alpha, which is an automated logistical specialist, which is a really fancy term for maintenance secretary,” she said. “I worked in the motor pool, I issued drivers licenses, dispatched trucks and kept track of inventory or truck repairs. The people I worked with were awesome, I loved everybody. Training for that in Virginia took 13 weeks. It was a pretty intense training”

She shared one of her favorite memories while serving in the National Guard.

“We got deployed in 2002 to the southern part of the state to do flood relief. It was like, this is why people join the military,” she said. “Being down there and seeing the people’s faces that we were helping. I was dispatching other people to go out and do things, but the gratitude from the people and being there to help them get their lives back together after the flooding.

“It made everything else that I went through and all the hard work worth it because we got to help people and make a difference. It was awesome. It really brought our whole unit closer together. Also, my National Guard unit got named West Virginians of the Year for 2001!”

“I also have a daughter, she is 14, I had her after I was out of the military. I got married while I was serving. I actually had to move my wedding,” she said.

“We were supposed to get married in June of 2003 and in January talks started coming out that we might get deployed,” she said. “So, I moved the wedding from June to February, and it snowed three feet the day before my wedding.

“I then got a call as I was getting ready to walk out the door to go to my rehearsal that said, ‘We can call you at any time and you have to be here within 24 hours.’ I talked to my commander and said, ‘Do I just need to get married tonight?”‘ He told me that I might want to.

“Well I didn’t,” she said. “I called my pastor and fiance freaking out. My fiance’s brother, who was the best man in our wedding, was called up to Iraq the week before our wedding. We ended up getting married on the planned date. Shortly after that, my unit got deployed to Virginia in March. We were called to go to an army base where we would be replacements for the people who had gone overseas.

“I didn’t go because I was put in the rear detachment. I had started having lung problems when I was in AIT and they weren’t sure what was going on but I had a hard time breathing. I couldn’t wear gas masks very well, running was a problem, along with many other activities. I was considered non-deployable because I couldn’t wear a gas mask,” she said. “I eventually ended up with a medical discharge that November because they couldn’t figure out how to fix the problem.”

When she got out of the military, Myerstook some time off to spend with her family, and then started working at Citizens Bank of West Virginia. After that, she worked at Valley Health Care, then at the First United Methodist Church as the chief financial officer. She has for years now been working for The Inter-Mountain, where she is now the business office manager.

Myers said she looks back at her service time fondly.

“I wish I could still be in,” she said. “I would do it again in a heartbeat. It shows you the strength that you have. If you would have told me 25 years ago that I would have made it through basic training on my own, I would have laughed in your face.

“You are a unit, you are a group, but you are on your own. You have to do it and you have to be strong enough to get through all of that. I did it and I went through,” she said. “I was there and my kids are super proud, which is super cool.”