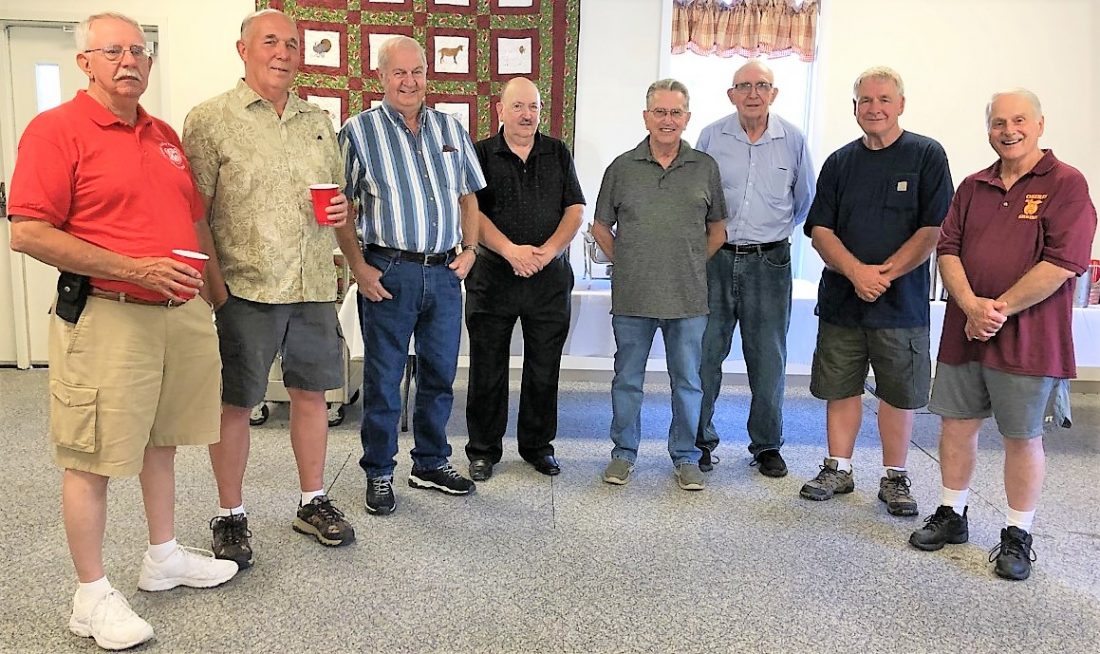 BEVERLY — On Aug. 17, a lovely day in the valley, the Tygarts Valley High School Class of 1964 gathered at Camp Pioneer 4-H Camp to celebrate 55 years since their graduation. The Camp Pioneer staff, with their accommodating nature, made it a pleasant occasion for all who attended.

Tom Zirkle, usually seated at the back of the class during his school days, drove in from Pennsylvania to share the day with classmates. Driving many miles from his home in Kansas, Chris Ritter was welcomed by longtime friends. The friends of Peggy (Simmons) Church were glad she made the trip from North Carolina with her husband, Dale, one more time.

The Rev. Glen Rader, informal class parson, traveled to the reunion from Ohio with his wife Glenna. Linda (Scott) Magyar, also from Ohio, adjusted her seat, donned her sunglasses and relaxed as her son, Steve, drove the many miles from the lakes to the valley. When Steve drives in next year, the class is hoping his mother will ride along with him. Mary Ellen (Ice) Guzy, a frequent participant in class events, drove in from Tennessee with a jar of her homemade chow-chow.

The class of 1964 was happy to welcome Darlene Hight, a surprise visitor from Ohio, to their 55-year celebration. A member of the TVHS Class of 1966 who had lived in Monterville, she and former school bus buddy, Chris Ritter, had formed a lasting friendship, years ago, on the long bus ride down the valley to Tygarts Valley High School.

After much mingling and conversation, the Rev. Rader gave the blessing and read the names of deceased classmates. Since graduating in 1964, 21 members, almost a third of the class, have passed away.

As they chatted and enjoyed old stories, the class feasted on a meal prepared by the Camp Pioneer staff. On the buffet table was a grand meal of tossed lettuce salad, baked steak and chicken, mashed potatoes with gravy, green beans, rolls and tea and lemonade. Cheesecakes with tasty choices of blueberry or cherry topping were provided for dessert.

Prepared for the class by the Wal-Mart bakery, a 55-year celebration cake decorated with the school colors, red and white, took center-stage on the snack table. Triggering more temptation for those with a sweet tooth, were peanut butter and chocolate chip cookies baked by the Camp Pioneer cooks. A sampler platter of peanut butter fudge, prepared by Delbert Salisbury and Linda Fink also wooed the coterie of friends.

Following the meal, Fred Ware Jr. opened the business meeting by leading a moment of silence in remembrance of those class members who had passed away since the class met in August, 2018.

In September, 2018 the class of 1964 lost Diane (Bennett) Blizzard. Diane had a voice for singing and was a member of the gospel group, The King’s Kids, which also included her husband, Allan, her sister, Sondra and Sondra’s husband, Bob. Finding enjoyment in painting, Diane’s artwork was gifted to friends and sold across the United States.

Passing away in October of 2018, Sharon (Shreve) Armstrong, with her husband Allen, had attended all the class of 1964 get-togethers. She took great pleasure in rhyming words, and wrote many heartfelt poems – sometimes humorous, sometimes serious – for her family and friends.

For her son she wrote:

I thank You Lord, O Friend of mine

For giving me this child of Thine

Help me to rear him in Your will

And all Your love in him instill.

About her sister she wrote:

She takes the toys from the kids

She socks them in the nose

She pulls their hair and kicks their feet

Takes scissors to their clothes.

But at bedtime she’s an angel

While the Lord her soul doth keep

But as soon as she wakes up

She starts again, the little creep.

Ettie Wegman Grey raised a family and lived all her life in the valley. She did beautiful hand-crochet, and brought some of her pieces to be auctioned at the class of 1964’s 50th class reunion. Ettie passed away in March, 2019.

On Wednesday, Aug. 14, the week of their 55th reunion, the class of 1964 lost another classmate, Sheryl “Cookie” Hawkins Birdsinger. Though she lived in “the great state of Texas,” Cookie never lost her love for the hills of West Virginia. She was never happier than when she could come home to the valley. Her best-loved flower was the daisy, and the last bouquet she received from her friends back home was an arrangement of daisies with her favorite bird, the red cardinal, nestled among the petals.

Continuing the business meeting, Ware called for the annual treasurer’s report from Gary Channell. Channell assured the class that after all the bills were paid, they would have an acceptable amount of cash in the bank.

To support Channell in his efforts to keep the coffers full, the popular class auction was held. With Ware as auctioneer, several items were put on the block. Judy (Ware) Primavero took home Mary Ellen (Ice) Guzy’s homemade chow chow. Guzy rode home with a tray of Primavero’s pina colada zucchini bread and banana bars. She also found room for a centerpiece made by Frank Channell’s wife, Linda. Channell, himself, had a winning bid for Primavero’s baked goods. He also had successful bids on two primitive pieces of wall decor. Though he felt no additional artwork was needed in his home, he was happy to contribute to the cause and gave with a cheerful heart.

Two 48-star flags that had flown at Tygarts Valley High School, during the school’s early years, were brought to the auction by Reuben and Marvella (Cutright) Currence. The most interesting and nostalgic items in the auction, the flags found a new home in North Carolina with Peggy (Simmons) Church. Not so fortunate when bidding on a large, blue, hand blown glass birdfeeder donated to the auction by Gary and Carolyn (Corley) Channell, Church was outbid by Patricia (McCauley) Ware.

Appearing again, the peanut butter fudge made by Delbert Salisbury and Linda Fink was much sought after during the auction. One three-pound platter of the popular fudge was taken home by Gary Channell and his wife, Carolyn. A second platter became a win for Primavero, and the last platter was snatched by George and Sue Coussoule. Rounding out the auction, a fruit basket from Crazy Harry’s, donated by Danny and Janet (Kittle) McCloud, was carried away by Mary (Shiflett) Wamsley.

Further increasing the class treasury, and led each year by Primavero, was the 50/50 drawing. Generous winners, Delbert Salisbury and Janet (Kittle) McCloud donated their winnings back to the class. Treasurer Channell then busied himself in the counting house.

Salisbury became a winner for the second time when he walked away with the much-anticipated door prize which was prepared for the class by Crazy Harry’s. A bushel, chipwood basket crammed full with fruit and other specialty items, the Salisbury car might have been scraping asphalt as it proceeded from the valley toward the Ohio River.

Completing the class business, Ware asked for volunteers or suggestions to plan the location of their 56th get-together. As the Camp Pioneer staff had been especially gracious throughout the day, and had prepared a plentiful, delicious meal, the decision was made to return to Camp Pioneer Aug. 15, 2020.

Departing for their homes in the valley or to homes much farther away, class members took with them specially made 55-year bookmarks and goody bags that included munchies for their trips back home.

From a grateful TVHS class of 1964, warm appreciation is accorded David Matthew and Richard Judy for their efforts in planning a memorable 55-year reunion.