CHARLESTON – In the wake of the devastating floods that ravaged southern West Virginia counties in June, the West Virginia Library Commission is asking that any donations of books to libraries in Greenbrier, Kanawha and Clay counties be reconsidered until those libraries can rebuild their facilities.

Karen Goff, executive secretary of the Commission, said libraries in the affected counties are in more need of cash donations to help rebuild facilities.

“The Rainelle Public Library and Kanawha County Public Library in Clendenin are in need of repair before books can be restored,” Goff said. “The rebuild of book collections will come later after facilities are reconstructed, and it will be up to each individual library as to how they want to restock their collections.”

Goff said it will be months before books can be placed back on the shelves and until then cash donations can be made by sending checks to the West Virginia Library Commission, 1900 Kanawha Blvd., E., Culture Center, Charleston, WV 25305.

Both Clay County and Richwood library collections were not damaged, Goff said. However, lower level storage areas were ruined. Donations can be made to the Commission for these two libraries as well.

The four affected libraries recently received flood recovery grants from the Commission to rebuild. Clay County and Richwood received $3,000 each, Rainelle $10,000 and Clendenin $10,773.

According to Goff, the Rainelle Public Library is already hanging new drywall. The library was hit hard, losing 20,000 volumes, with the building’s interior severely damaged.

Terry Wooten, Marketing and Development manager for the Kanawha County Public Library indicated that the Clendenin branch lost 340,000 items and the library Board voted last week to retain the building and clean it out.

“We have no idea when the library will open again,” Wooten said. “We are waiting for insurance, and FEMA assessments before we move forward.”

More than nine feet of water from the Elk River left heavy damage at the Clendenin Branch Library building, and floodwaters knocked out the access bridge to the Elk Valley Branch at Elkview Crossings.

According to Ellie Teaford, branch manager for the Elk Valley Branch of the Kanawha County Public Library system, the flow of residents through the temporary library had been steady throughout the day.

“Since both Elk Valley and Clendenin are not open due to flood damage, there was no library service in this part of the county,” Teaford said. “Residents without internet had no way to print documents, look up information and receive messages.”

The Elk Valley Express Library will remain open until access is restored to the Elk Valley Branch Library at the Crossings Mall. According to Wooten, this could be an estimated two to three months.

The Elk Valley Express Library can be contacted at 304-965-8956. Donations to the Clendenin facility can be made by visiting the website, kanawhalibrary.org/locations/clendenin/ or mailed to Kanawha County Public Library in Clendenin at 123 Capital Street, Charleston, WV 25301. 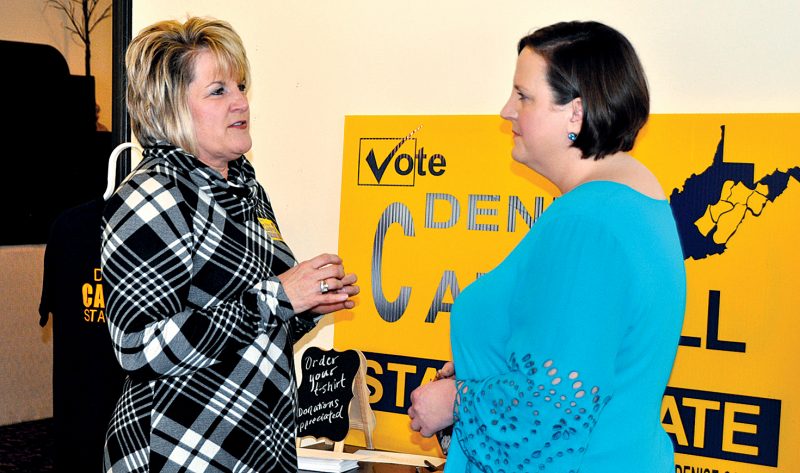