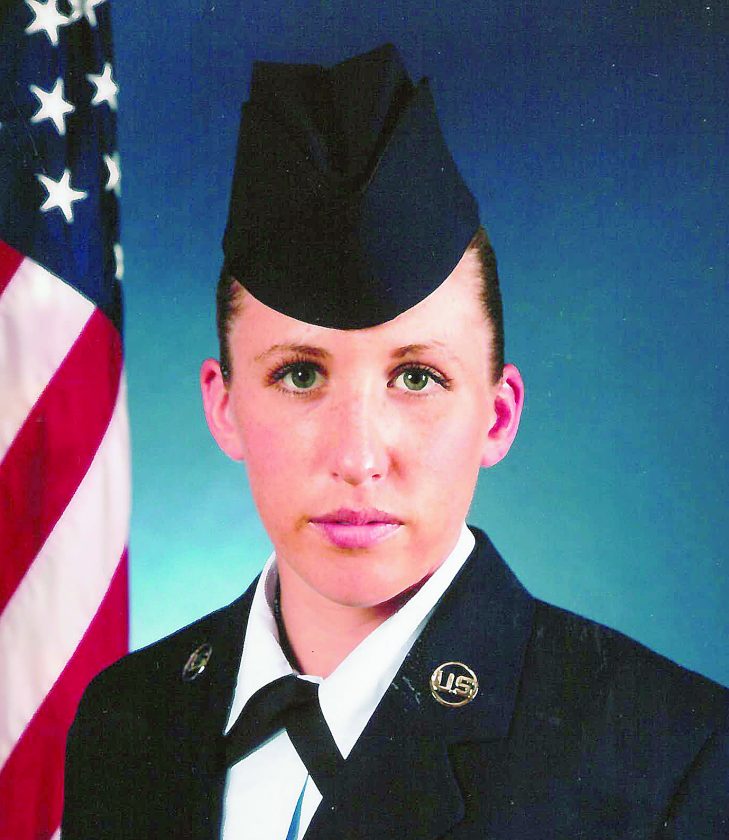 ELKINS — It takes a disciplined and courageous individual to not only take on a career in the military, but at the same time earn a college degree. Jessica Varian, current Davis & Elkins College student, has challenged herself to do exactly that.

Varian has served nine years in the Air National Guard. She currently is stationed at the 167th in Martinsburg, where she has obtained the rank of E6, technical sergeant.

Her grandfather played a huge role in her life, inspiring her choice to join the military.

“My grandfather was in the military,” she said. “He retired E7. He has always just been a huge role model and the same for my uncles, they were enlisted as well. One is in the Army and one is in the Air Force. It has always been kind of like a plan B in essence, but once I decided to take that route it just felt right. I was 23 when I enlisted.

“I enlisted after my first failed attempt of college at Glenville,” she said. “I needed to do something different. I needed the discipline and that is another reason I joined. I needed a solid path to go on and it really helped me.

“I grew up in a very amazing family. Any dark road that I took was my own doing. I did the regular rebellious thing and made good friends but bad choices. I saw what I was doing and was like, this is not the road that I want to take. I enlisted and it was my way out, it was my safety blanket that paid for my college and let me travel.”

Varian’s travels have taken her around the world.

“I’ve done four years in Great Falls, Montana, at a base called Malmstrom,” she said. “To be honest, I thought it was a German base when I first got assigned. That is what everyone thought, too! I dare not say it was a let down, but it was close.

“Then, I went to Adana, Turkey to Incirlik Air Base for 15 months. I did almost two years in Moody Air Force Base in Valadosta, Georgia. I got a deployment from there to go to Qatar, Iraq, for a few months, then came back and finished out my six months. It was so cool.

“My favorite place would have to be Turkey because before we got put on lockdown, we could actually go off base and experience the culture,” she said. “We were able to go to different countries and experience their culture. I definitely enjoyed going overseas.”

Another part of being in the Air National Guard that she enjoys is the bonds and connections that she has been able to make.

“My favorite part is honestly the people,” she said. “Throughout the comradery is completely different than you would find in civilian lifestyle. People from my first base I have not seen since 2014 and we talk at the very minimum, once a month. All of my friends are spread out. No matter where we are, we still talk.

“That is one thing that my grandfather told me. He said, ‘When you join the military, you will find the best people in your life. No matter where you go, no matter the years between, they will always there.’ That has definitely been proven to be true.”

Balancing college classes with the military has proven to be challenging. Recently, Varian was deployed to Japan during the middle of the semester.

“Up until this current deployment to Japan, it was doable,” she said. “I was supposed to be gone for two weeks but we ended up staying for three because the plane was having mechanical issues. This is the most stress I have ever dealt with since my first base. At my first base, everything was very strict. Once I get caught up with everything, it will go back to being able to balance everything. It is not easy.

“To be an officer you have to have a bachelors degree. I am hopefully going to be swapping over to public affairs and that will give me a leg up. Military is ran though regulations so it is pretty much already cut and dried, but it will be a deeper dive into proper formats, which is what I like.”

Varian is studying English as a sophomore at D&E. Her future plans involve finishing out her English degree and then go back to active duty. She hopes to go back as an officer. She also hopes to stay in the military for as long as she can until retirement.

The majority of Varian’s family members live in the area. Her parents live in Dry Fork, one sister works at Valley Health Care, and the other sister works as a physician assistant at Davis Medical Center.