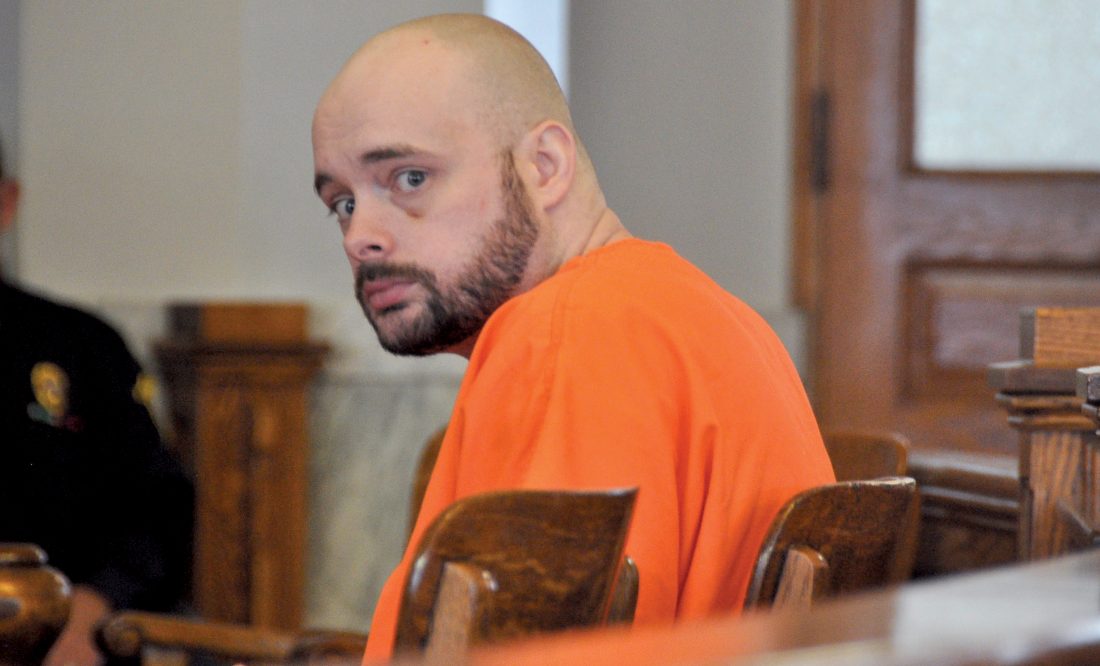 The Inter-Mountain photo by Brooke Hinzman Earl Jerrod Click has been charged with first degree murder after the death of a Huttonsville Correctional Center inmate.

ELKINS — A preliminary hearing was held in reference to a murder case in Randolph County Circuit Court this week.

Earl Jerrod Click, 33, an inmate at Huttonsville Correctional Center, is charged with first degree murder, a felony, after the death of inmate Allen Eugene Longwell on Oct. 23.

Though Click initially waived his preliminary hearing, his attorney Brent Easton requested the opportunity to have one.

The hearing was presided over by Randolph County Circuit Judge David Wilmoth, with Prosecuting Attorney Michael Parker representing the state.

While being questioned during the hearing, Ryan Zirkle, a corrections officer at Huttonsville Correctional Center, stated that he was the one who discovered Longwell’s body.

Zirkle said that he was performing a security check and shutting down the patio at the facility prior to observing Longwell “laying on his back with blood everywhere” in cell 113.

“There was blood all over the floor and all over his face. It was disgusting,” said Zirkle.

Sgt. Danny Vandevender, who has been employed at the Huttonsville Correctional Center for almost 10 years, stated that he was approached by Click who told him, “You’re looking for me. I know.”

He also stated that there was swelling under Click’s left eye and that he observed blood on his shoes.

Vandevender said there is no video surveillance footage of the murder due to a glitch in one of the cameras.

“(We) observed the victim laying in the cell on his back, covered in an abundance of blood — what appeared to be his own blood,” said Watson.

Watson stated that as Click was secured in another room, he and Siler began processing the scene in the cell.

Watson stated that it appeared there were several small puncture wounds on Longwell’s body and that there was a metal rod placed in his left hand when officers initially entered the cell.

Watson stated that he believed the puncture wounds were then compared to a metal rod “because it had been filed to sharp point on one end.”

He added that the rod was approximately a foot and a half in length and had been bent into a handle on the other end.

“When I first came into the unit, I noticed there were a couple bags of trash laying right where you walked in the door along with a broken broom frame. At the time, even before I made it to the crime scene, I thought that looked odd. Once I went into the cell where the crime took place, I noticed the metal rod and instantly knew where it came from,” said Watson.

He added there was “a lot of bruising” on the right side of Longwell’s face and on his neck and chest area in addition to the puncture wounds on his chest, leg, arms and face.

“You could just tell. I mean, it was black,” said Watson.

Watson noted the medical examiner determined that Longwell was choked to death and that none of the stab wounds were deep enough to be fatal.

Watson then processed Click’s cell, where he photographed clothing covered in “an abundance of blood.”

“We (then took) Mr. Click into an interview room, Mirandized him and performed an interview,” he said.

“Mr. Click stated in the interview that he didn’t remember stabbing Mr. Longwell, but he did state that it was one of those things where they had words prior — the day before — and that he was bragging about getting out.”

“He said he just snapped, and he didn’t really remember anything that just happened. He woke up with his hands around (Longwell’s) throat,” said Watson.