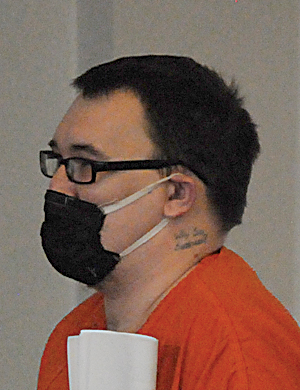 ELKINS — An Elkins man was sentenced to one to five years in prison for the offense of possession with intent to distribute methamphetamines, a felony, in Randolph County Circuit Court Wednesday.

Joshua Glen Black, 32, was arrested on May 31, 2019 along with five other individuals when Trooper First Class J. M. Tallman of the West Virginia State Police and state parole officer B. Thompson were attempting to “locate an absconder from parole,” according to the original criminal complaint.

The two officers knocked on the door of one residence of the Four Seasons Hotel at 456 Harrison Avenue and “could immediately smell the odor of marijuana emitting from the residence,” states the complaint.

Tallman searched the six individuals within the residence and located a small bag of white crystal substance, which they believed to be methamphetamines, inside the cigarette pack of a woman present.

Upon obtaining a search warrant for the apartment, officers located approximately 55.8 grams of white crystal substance, believed to be methamphetamines, in addition to three digital scales and a drug ledger.

Black was represented at his sentencing on Wednesday by his attorney, Tim Prentice.

“Mr. Black, first off, has been good to work with and has spent a good bit of time in jail,” said Prentice. “Mr. Black (completed) the 12th grade, he’s 32 years old and he has two children.”

“I would ask the court to consider the fact that Mr. Black has been incarcerated continuously for 14 months, approximately, and that he has been write-up free and not a problem,” said Prentice. “He’s assisted the state in solving the crime with regard to the other defendants. He’s taken responsibility for what he did and he’s remorseful.”

“His life will forever be changed by this. I don’t think that further incarceration would do any one any good and so I ask that you give him an alternative sentence,” said Prentice.

Wilmoth noted, after looking through Black’s criminal history, that there were not a significant amount of “serious offenses,” but quite a number of minor offenses such as vehicle violations.

“What’s most concerning to the court is that this is a drug charge that involves methamphetamine and 55, almost 56 grams of methamphetamine were seized from your apartment at the time of the arrest,” he said.

“It would be the judgment of the court that for this offense, possesion with intent to distribute methamphetamines, (Black) should be sentenced to a period of incarceration of not less than one or more than five years,” said Wilmoth. “You have asked for an alternative sentence, a request for probation and community corrections, and the court is not inclined to grant you that.

“I do not believe that is an appropriate disposition for this case and I’m not convinced of your compliance.”