Simmons makes a splash at WVU 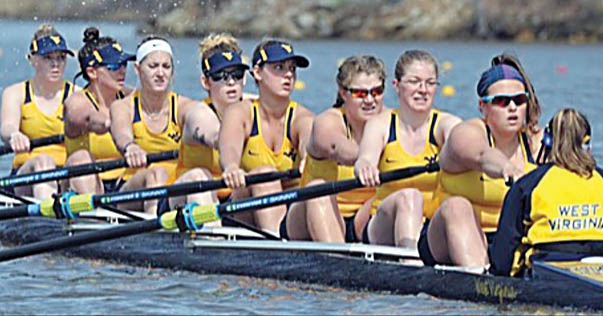 As a novice walk-on for WVU, Simmons was voted “Most Improved” by her teammates at an end-of-year sports banquet in Morgantown recently.

Simmons played soccer all four years at Elkins High School, and participated in band, track and tennis. Among the requirements to succeed in rowing, she said working with others is key.

“Teamwork is one of the most important aspects of the sport,” said Simmons. “It requires everyone to work together in unity to move the boat quickly through the water as well as listening to the coxswain giving the rowers directions.”

Rowing is not a spotlight sport, though competing successfully requires a vigorous amount of physical fitness and training.

“Going into my freshman year, I wanted to get involved and stay active,” Simmons said. “I heard about the novice tryout, and I previously enjoyed being on the water kayaking. I thought I would enjoy rowing, too. I decided to give it a chance.

“While being a student athlete, it is challenging to juggle classes and practices Monday through Saturday. But it is rewarding to see the hard work pay off on the water and in the classroom,” she said.

“I have had the chance to work with a great coaching staff and teammates that are always pushing each other to improve and push limits. I was out of my comfort zone at first because it was unlike anything I’ve ever done before and by far one of the hardest thing I’ve done,” she said.

“The training is competitive and you are always trying to beat your teammates’ numbers as well as your own to get better and make the team better. I’ve became more fit physically and mentally. I’ve made great friendships and had experiences unlike most college students.”

Just getting accepted onto the crew was difficult, as the tryouts included time out of the water at the WVU Coliseum. Simmons said the early going was very challenging.

“While in high school, I took up kayaking and during my orientation at WVU, I stopped by their booth and expressed interest in trying out,” Simmons said. “The tryouts were very strenuous. Some examples were running the stairs at the Coliseum, flipping tires and more.

“Each day was a challenge and I did not want to give up. This became more of a personal battle to prove to myself I could do this.”

Simmons referred to teamwork again, and showed pride in representing her state’s land grant university on the water.

“This award (for most improved rower) made me feel really good and realize my hard work paid off,” Simmons said. “By being on the team, I was a little out of my comfort zone. But each day, I pushed forward and became a stronger person. I am much more fit, physically and mentally, than I have ever been. Let’s go, Mountaineers!”