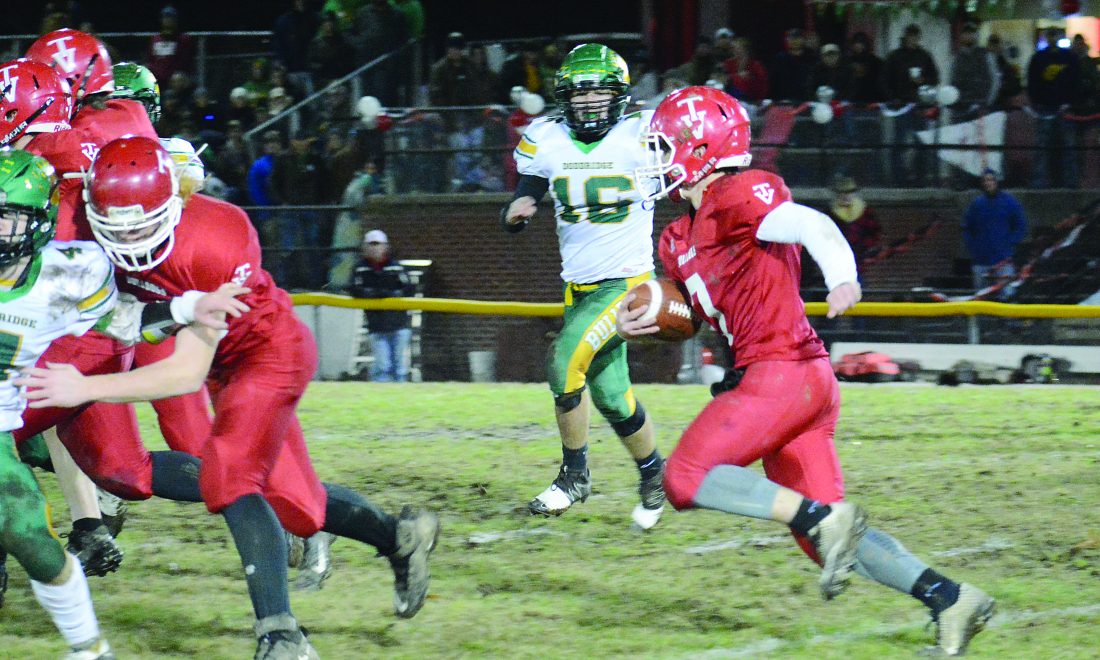 MILL CREEK — Hunter America rushed for 204 yards and scored four touchdowns as Class A, No. 1 Doddridge County claimed a 46-7 win over No. 9 Tygarts Valley Friday night at Bulldog Field.

America did all his damage in the first half as the visiting Bulldogs (10-0) scored on all six of their first-half possessions to build a 40-0 halftime lead.

It was the second straight undefeated regular season for Doddridge, which will be the top seed when the official final playoff ratings are released today.

After receiving the opening kickoff, Doddridge County embarked on an 11-play, 64-yard drive which erased nearly half of the first-quarter clock.

Dylan Knight capped the march with a 6-yard run to make it 6-0 after the failed conversion kick.

After the Doddridge defense came up with an interception on TV’s initial possession of the tilt, America scored the first of his four TDs on the night on a 1-yard score.

The hosting Bulldogs, meanwhile, were forced to punt four times over the first two quarters, despite entering Doddridge territory on three occasions on the strength of solid kickoff returns from Daniel White and Caden Boggs, along with a flurry of personal penalty fouls whistled against the visitors.

On its third possession, America capped off another long drive for Doddridge with a 17-yard scamper on the final play of the first quarter to extend the lead to 20-0.

The visiting Bulldogs’ passing attack accounted for the next score when Noah Bumgardner hit Griffin Devericks for a 9-yard connection over the middle of the field, pushing the lead to 26-0 after the PAT kick was blocked.

America, who didn’t play in the second half, added touchdown runs of 30 and 33 yards to set the score at 40-0 at the intermission.

Reese Burnside tacked on a TD run in the third quarter for the winners, while Tygarts Valley got on the board when Josh Bright hit Daniel White for a 46-yard catch-and-run.

Tygarts Valley dropped to 7-3 on the season and will find out today its playoff opponent. It will be the first postseason berth for the squad since 2005.