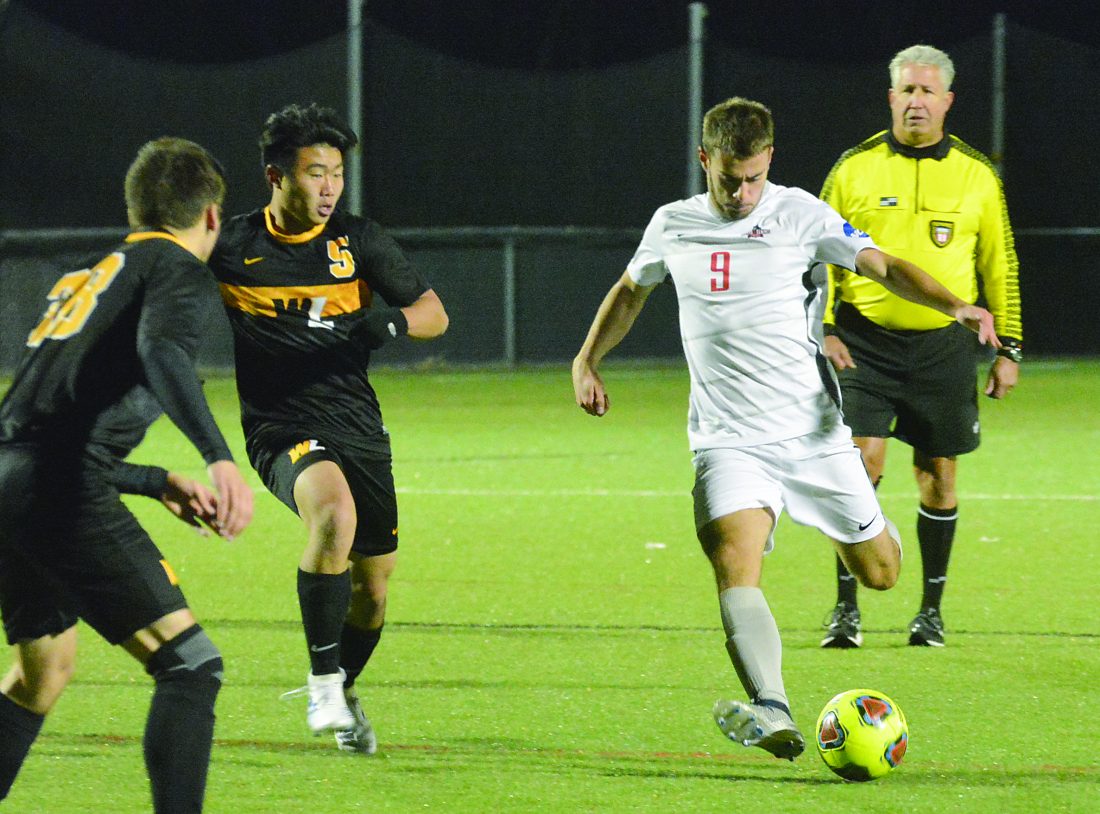 The Inter-Mountain photo by Edgar Kelley Davis & Elkins’ Daniel Cerezo lines up a shot attempt during Wednesday night’s MEC match against West Liberty at Nuttall Field. Cerezo had a goal in the Senators’ 5-0 victory. D&E hosts West Virginia Wesleyan on Sunday to conclude the regular season.

The Senators, who improved their record to 8-8-0 overall and 7-8-0 in league play with the win, jumped out to a 1-0 advantage at the 11:42 mark when Markus Just scored off an assist from Gill.

Davis & Elkins pushed its lead to 2-0 less than 2 minutes later when Gill scored the first of his two goals. Abel Ameyaw assisted on the score as the hosts took a two-goal lead to the break.

Gill scored his second goal at 62:34 of the second half to extend the Senators’ lead to 3-0. Felipe Polycarpo had the assist on the score.

Daniel Cerezo then gave Davis & Elkins a four-goal edge when he scored off and assist from Francisco Ferrer at the 83:07 mark.

Ferrer capped off the scoring for the Senators a minute later when he found the back of the net on a long shot from 35 yards out.

Everton Carvalho recorded a pair of saves in earning the shutout for the hosts.

The Senators will entertain MEC rival West Virginia Wesleyan for Senior Day at 3:30 p.m. on Sunday in the regular-season finale.

Monaselidze opened the scoring for Wesleyan (11-5-1, 10-4-1 MEC) just 6 minutes into the match and the hosts went on to control a 5-0 lead at the break. Monaselidze added another score in the first half of play and was joined by Josh Tenney, Javier De Ona Garcia and Sinasi EmreDeniz.

Lauri Vasa scored 2 minutes into the second half for Wesleyan to end the scoring in the contest. Tenney also finished the game with three assists for the Bobcats, who held a 17-3 edge in shots and a 5-1 edge in corner kicks.

Wesleyan will visit rival Davis & Elkins at 3:30 p.m. on Sunday.