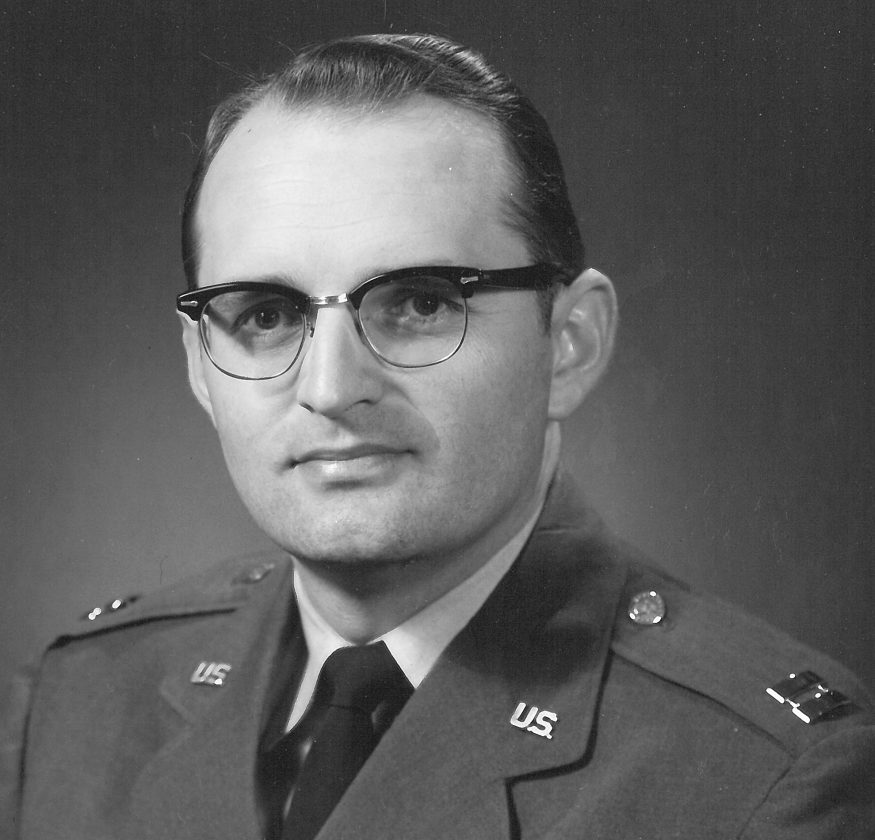 ELKINS — A Randolph County native worked his way up to the rank of lieutenant colonel in the Air Force, along the way serving in Vietnam and working at the Pentagon.

John H. Knutti, Jr. was born on Oct. 19, 1933 to John H. Knutti, Sr. and Adlaide E. Fullmer Knutti, and spent his childhood growing up on their farm in Bowden. He was the second of seven children.

Knutti began his military career after receiving his B.A. from Southeastern University of the Assemblies of God, where he was president of the student body.

“In college you were deferred from service, but as soon as I graduated, I was subject to the draft, and I didn’t want to be drafted. So, I volunteered and enlisted in the Air Force for four years,” said Knutti.

“After that particular assignment, I was pastoring a church as well as being part of the military there since I had ministerial training,” he said. “I pastored that church for a little over two years. I then went to Florida Southern College to go back to school, but again, I was attending a church where the local pastor left, and they requested that I fill in until they found somebody else. I ended up being the pastor there for three and a half years. During that time, I founded a new church, which is still going today. In 2020, it will be 60 years old.”

He began his Air Force career attending basic training in San Antonio, Texas, and was then stationed there for two years.

“That was pretty tough. I had just come out of college. Going directly into boot camp was a whole lot different — having your hair all shaved off, wearing a uniform and having everyone tell you exactly what to do and when to do it and how to do it. It was quite a change, but that was 11 weeks of getting into shape in the military. We went to some pretty good training there — pretty realistic,” said Knutti.

“Even though it was Air Force, we went through the mud, camping out for a whole week. We lived in tents, slept on the ground and ate, slept, showered the little bit we could.”

“One interesting thing about boot camp was that I was in the first racially integrated barracks in the Air Force training system. We had a good time. I don’t know of any problems that came up as a result,” Knutti recalled.

Later on, Knutti was stationed at various bases across the U.S. and traveled to overseas assignments in Iceland, Vietnam and Turkey.

“In my early days, I trained our pilots on the military firing range,” said Knutti, describing some of his duties as an education and training officer prior to being transferred into intelligence. For a while, he also acted as a liaison for the Air Force Academy.

“I guess, in a way, you could say that I saw combat, but I didn’t participate in it. All of my Vietnam tour was in the intelligence field, and I worked in photo intelligence — where we read photos from the battle lines, set up targets and things like that for the people who were actually involved in combat. Once they were in combat, we flew reconnaissance missions, photo missions to see what damage was done and that kind of thing,” said Knutti.

Knutti believes that he encountered an angel while stationed in Turkey on New Year’s Eve in 1974. At the time, Turkish and Greek Cypriots were at war over the borders on Cyprus. Serving as the chief of military intelligence at the Incirlik Military Base, Major Knutti was called in by his base commander, who said, “I want you to dress as a civilian, take your wife, go to Tarsus and observe what is being loaded onto the ships in the harbor.”

After making the 30-mile trip to Tarsus, Knutti and his late wife Evelyn spent their afternoon in a cozy restaurant where Knutti could discretely observe the activities in the harbor.

The Knuttis began their trip back around midnight but were soon stopped by a policeman, who noticed the license plate from the base. The policeman then asked Knutti to drive one of his men to Adana, which was near the base. Knutti did not want to take him due to the political tensions at the time, but felt he had no other choice. The man climbed into the back of the vehicle and appeared to fall asleep immediately.

There were soldiers lining the road motioning for Knutti to stop the vehicle, but he didn’t notice through the dark and stormy night. Suddenly, the passenger in the back seat yelled, “Dur abi!” which translates to “Stop, sir!” The soldiers had vehicles lined up at the roadside and were searching everyone. After speaking to the passenger, the soldiers allowed Knutti’s vehicle to pass. The passenger then appeared to fall asleep again.

During the drive, they passed through two more roadblocks where the passenger yelled for them to stop and then spoke to the soldiers, and they were allowed through.

Upon arriving at Adana, the passenger asked Knutti to stop and quickly exited the vehicle. Knutti turned to thank the man for his help, but he had disappeared.

To this day, Knutti believes that the man was an angel sent from God to act as a guide through his trip — which could have been a highly dangerous situation had he and Evelyn been traveling alone.

After leaving Turkey, Knutti travelled back to the states and attended Intelligence Officer’s School and a post-graduate intelligence course. He spent the last six and a half years of his service working with the Defense Intelligence Agency at the Pentagon in Washington, D.C.

“Most of the work that I did throughout my career was classified,” said Knutti.

His combined active duty and reserve career spanned a total of 29 years. Knutti officially retired from the U.S. Air Force with the rank of lieutenant colonel on Oct. 31, 1983.

After his retirement, Knutti and his wife Evelyn decided to do volunteer work with church organizations. He served as Director of Development For Valley Forge Christian College for five years. From August 1989 to May 2001, Knutti and Evelyn worked for HealthCare Ministries, which sends medical teams all over the world to assist in missions projects. Evelyn Knutti passed away in 2001.

During his time working with HealthCare Ministries, John Knutti met his current wife, Peggy Johnson, of Alexandria, Minnesota; the two married in 2006.

Knutti is now a supporter of both Veterans of Foreign Wars and the Wounded Warrior Project.

John and Peggy Knutti currently live in Elkins and are very active in the church community at Good Shepherd Assemblies of God.

“It’s been an interesting life. I didn’t plan a lot of things the way they turned out, but they ended up fairly well. I think the average retired life of a military officer is five years, and I’m passing that by about 30 now. I’m pretty fortunate,” he said.