Roy served in the U.S. Army in both Korea and Japan 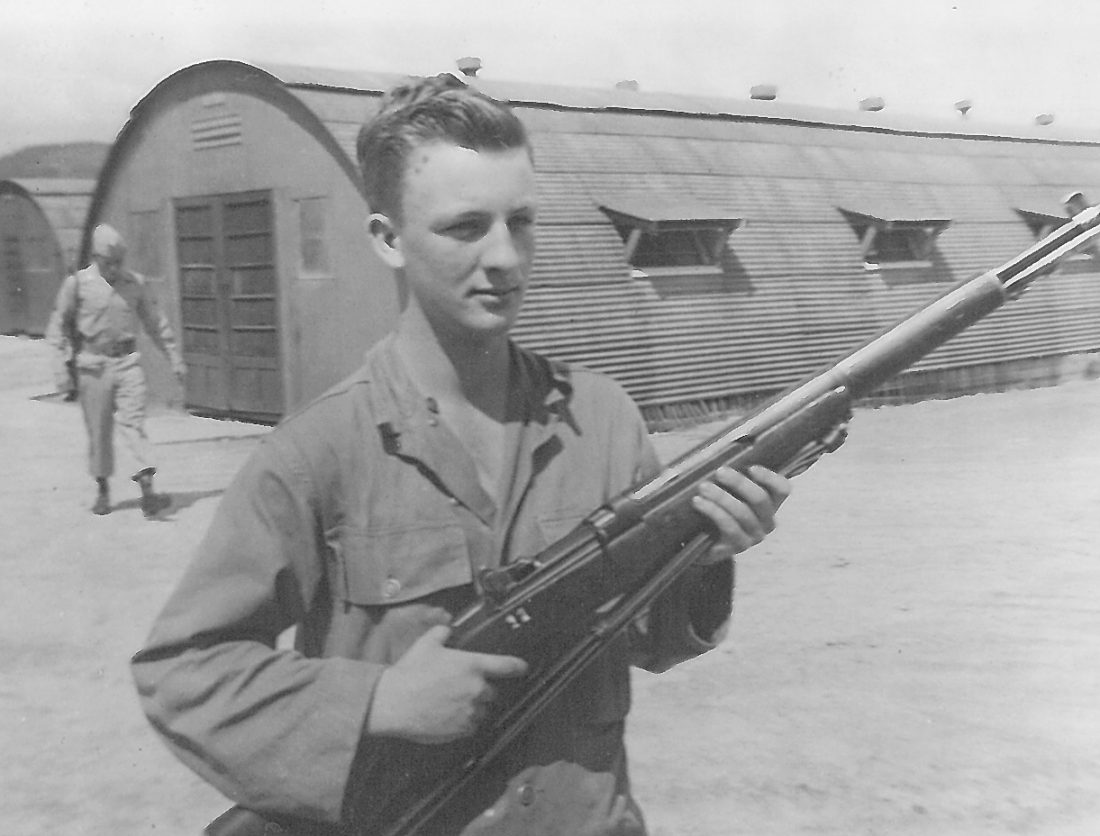 Submitted photo William ‘Bill’ Roy served in the U.S. Army from 1947-1950. His travels during his service took him to Korea, where he was stationed for a year, and to Japan, where he saw the ruins of Hiroshima.

ELKINS — An Elkins native’s Army service in the 1940s took him to Korea and to see the ruins of Hiroshima.

William “Bill” Roy grew up in Elkins, living with his father, mother and two siblings, a sister and brother.

After dropping out of high school about half-way through, Roy decided to join the Army at age 17 to try to improve his life.

“I finished my training and then a class opened up and I went to school for tanks and tank engines,” he said, remembering how he entered the Army in 1947. “At the end of school, the last thing that they did was set up a bunch of Sherman tank engines up on stands. There were exhaust lines running outside. There was a crew of four on each tank and we were given instructions to do something to mess the engine up without doing any damage to it.

“So I told the guys who were in my group, ‘Boys, gather around so the others can’t see what I’m doing.’ I pulled the distributor cap off of it, I had a pencil in my back pocket, made some carbon lead marks inside the distributor cap, and put it back on. We started it up but the spark was following those pencil marks instead of going where it was supposed to go. Pop, bang, pow! The engine was backfiring and carrying on,” Roy said.

“Well, of course the first thing that they looked at was timing. We didn’t change the timing, it was still hitting about 3 degrees or so before it caught dead center. It wasn’t timing. They were all over that engine trying to find what my group and I had done to it, but they never found it,” he said. |When their time was up, I pulled the distributor cap off. I said, ‘Here it is boys!’ Wiped it off, put it back on, and it started running normally. I was sneaky.”

Roy said incidents like that one are what he likes to remember about his time in the service.

“I always look back at the funny things, but I don’t like to remember the misery,” he said.

When Roy finished tank and tank engine school, he was sent overseas from the docks in Seattle, Washington, an old World War II Liberty ship.

“Those ships were meant to haul goods over to wherever, and come back. They are one-trip ships,” he said. “But here this thing is, in 1947, two years after the war is over, still being used for troop transport. So we are sailing along, and about the time that we were south of the Aleutian Islands, we got into a typhoon. I’m sitting down with a bunch of other guys on metal folding chairs watching a movie. There was an empty hole, so we fixed it up like a little movie theater. All of the sudden everything went haywire. We were all dumped back into the corner of the hole, then the ship rolled the other way. It wasn’t rolling side to side, it was pitching and rolling. We hit that storm bad.

“I ran up on the ladder to the hatch, where there was a porthole, to see what was going on. I looked out and thought that we were on a submarine. Waves were breaking clear over the ship. Then, after many loud, knocking sounds there was an announcement that said, ‘Water tank doors are being closed.’ Where you were is where you stayed because there was no way to get out. “

Finally, we had come out of the storm. I asked one of the crew workers how bad the storm really was. He said, ‘I was up on the bridge when that was going on. I watched us go into the red both ways several times. I thought this ship was going to turn over.’ We all could have been dead,” he said.

The crew made it safely to Yokohama in Japan. From there, they traveled by railroad, stopping in Hiroshima.

“I walked out to where I could look over the city and all I saw was rubble. It (had been) hit with an atomic bomb,” he said.

Roy served for a year in Korea. At that time, the new crew was interviewed and told it was time to choose between three specializations, which was known as a soldier’s Military Occupational Specialty. The three options were infantry, quartermaster or signal company.

“I didn’t want anything to do with infantry or quartermaster, so I picked signal company. That’s where I ended up — 7th Signal Company, 7th Infantry Division. I was there for a year,” he said. “We lived in huts that were made of corrugated metal. They were in like an arch shape and were not insulated. It gets very cold in Korea in the winter time and that is when us newbies got there, in the dead of winter.”

After his year in Korea, he was taken back to Japan to finish out his service.

“I was working for supply, and the supply sergeant was a good buddy of mine. He was from Nashville, Kentucky. Sharon Barthalamule Medley was his name. He went by his initials. Medley was a good guy,” he said. “He had been a tech sergeant in World War II. Medley and I got to be good buddies because we were both hillbillies. He was a character. I thought the world of him.

“I tried to look him up several years after we got back in the country. I got a handful of dimes and started down the list of Medley’s. After the third call, I connected. I got ahold of this girl and told her that I was looking for a guy that I was in the army with and that his name was Sharon Barthalamule Medley. She said, ‘You must be talking about Uncle Bart. I hate to tell you this but he is dead. He was with some other guys putting shingles on a roof and when they were taking a break for lunch. The other guys found him in his pickup truck. He had a heart attack.’ So I never got to see my old buddy.”

Little did Roy know at the time that after his service in the Army came to an end in 1950, he would come back home to Elkins and his life would be forever changed.

“About three days after I got home, a buddy of mine introduced me to the girl that ended up being my wife. It was a blind date,” he said. “We went together for two years before we got married. We got married on leap year day!”

Roy worked for the state highway department on a survey crew, where he advanced to the highest rank of the department.

“I thought, well I really like this kind of work, but there are some gaps in my education,” he said. “So, I took a correspondence course for highway engineering for international correspondence, and went to night school for college to plug the holes in my education. While I was in the Army, I picked up my GED.

“I eventually worked my way up in the highway department, but in 1957 I quit because there was nowhere else I could go since I was already at the top working as the construction office manager. I wanted to work out in the field, but the older guys had all of the field positions.”

After Roy quit, he took on other different jobs for a couple of years until he found the right fit. He received word from the state telling him workers were needed in Parkersburg.

“I got a call from the state and they said that they had a lot of four-lane highway that needed work done. I told him that I was used to getting paid more than what the state pays, and he responded by saying you go ahead to Parkersburg and I’ll tell them you’re coming. So, when I got there I was told I already had the job and was going to get paid only a couple dollars under what the top workers were getting paid,” he said.

“I took the job and long story short, I retired from the state a while later. During the many years that I worked there, the state started bringing these new kids in that were fresh out of college and putting them in management positions that they had not been trained for. I didn’t like these pups coming around and telling me how to do my job when I had been training some of them. In fact, I even taught a class in specifications. Well, I watched this happen and wanted to be one of the key personnel so I learned everything that I could learn.

“Whenever the winter training program ended, they were given a test to see how much they had learned,” he said. “Being an instructor, I didn’t have to take the test, but I wanted to take the final test anyway because I was curious about how I would do. I got a letter back from the district engineer that told me I stood in the district as number one, and that I stood in the state as number one.”

Currently, Roy resides in Elkins with his wife of 67 years.