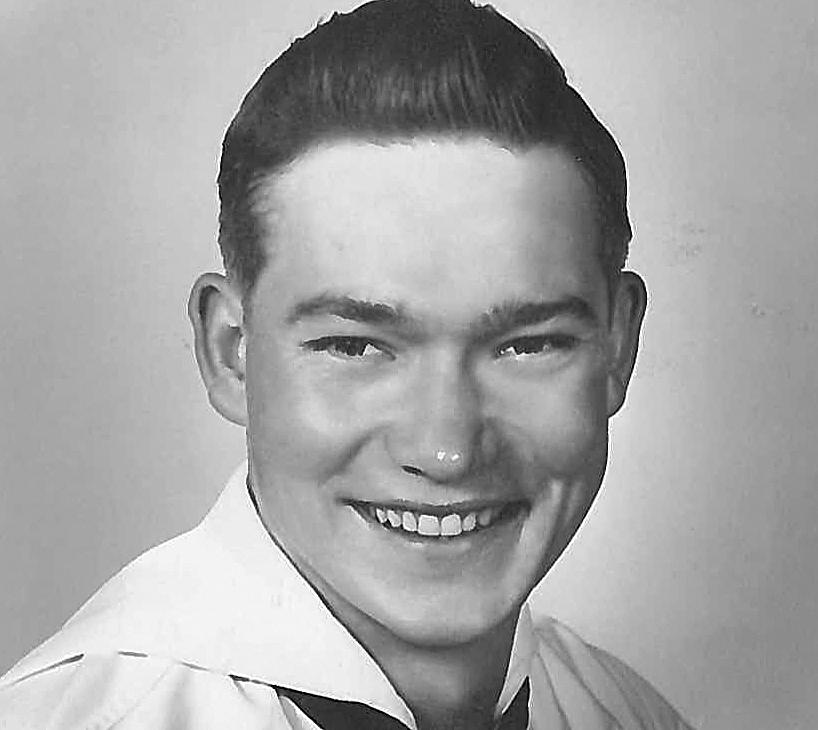 DAILEY –At age 88, Joe M. Carlson now looks back and reflects on the life experiences he earned while serving in the U.S. Navy from 1949-1953.

“I was 18 and I just graduated from Elkins High School,” Carlson said. “I couldn’t get work of any kind. We had a farm between Harpertown and Gilman and my dad worked away most of the time, so I took care of the farm.

“By the first of July I still couldn’t find anything. I went down and talked to the Navy recruiter. My older brother was already in the Navy. Well, we talked and I enlisted for three years, and I said, ‘Well, sign me up.’

“He told me that he had a three-month waiting list of guys that had been accepted but were just waiting to hear back,” he said. “I thought, ‘Well, I have plenty of time to look after the farm throughout the summer.’ I told him to sign me up anyways. He said, ‘I have to give you a test first.’ He brought out this test that had 80 questions on it, put me in a room, and told me that I had one hour to finish it.

“Well, I finished that test in 45 minutes and I took it out to him,” Carlson said. “He told me that I still had time but I said that everything was on there and I was finished. He grabbed his key and started to mark down on my test. He was kinda whistling under his breath. I had gotten 79 out of 80 questions right. A week later, I was in the Great Lakes, already in the Navy. I didn’t know what had happened to the three-month waiting period!”

Once he finished bootcamp, Carlson was assigned to a ship.

“I finished bootcamp and was put on this ship that my brother was already on! My brother and I had spent nearly three years together on that ship,” he said. “When he got transferred off to our sister ship, we had the division flag, there are four destroyers in the division, and at that time we had the division flag and we would go in and tie up. Well, one time when we tied up I looked over and the ship that my brother was on was tied up right beside of us.”

“I spent my whole career on that ship,” Carlson said, and during that time he worked his way up to the rank of Second Class Petty Officer. One of his outstanding memories in the Navy took place in the summer of 1950.

“In the summer of 1950 we picked up the shipmen from the summer cruise. Ross Perot was one of them! I have a book on him and still have a picture of him on my shelf when he was there,” Carlson said. “A fellow that ran as his vice president when Perot ran for president (James Stockdale), he served as an officer on that ship at one time.”

Romantically speaking, Carlson was engaged while he was in the service to a girl that he dated in high school. They planned to get married once he got out of the military.

“Well, I got one of those famous Dear John letters and I thought, ‘Boy, this is the end of the world,'” he said. “It actually turned out to be the best thing that ever happened to me. I had a younger sister and she was a junior in high school in Tygart Valley. We would write each other all of the time. In one letter she told me, ‘Here is a girl’s name. You ought to write to her. She has red hair and blue eyes.’ That was all that she said. I had no idea what to write.

“One of my buddies, he had been in World War II, had just finished two years at the University of Connecticut. He wrote something for me, and I thought it was great. So, I wrote it in my handwriting and sent it over to her,” Carlson said. “She answered and we continued to write each other. When I took 30 days leave, I went home and met her. We dated the whole time that I served.

“When I went back, we kept writing and in one letter she told me that her birthday was the 14th of April. Well, I check the roster and I had a 72-hour liberty that weekend. Saturday morning I was over in Elkins and I celebrated her birthday.

“That Christmas we got engaged. We were going to get married when I got out. I was supposed to get out the first of July in 1952,” he said. “I went to bed one night with 30 days to go and I woke up the next morning and was told that I had a year and 30 days to go. So I called Annalee, she was working for the FBI in Washington, and I told her that there was nothing that I could do about it. She asked me how much leave I had and I told her I had about 20 days. She said, ‘Why don’t you take your leave and come down and we will get married and go home and tell our parents!’ That is what we did!

” I went back to finish my last year. When I got out, I got the GI bill, which pays $135 dollars a month. That had to cover all of your expenses.”

Unfortunately, not all of Carlson’s experiences were ones of which he was fond.

“That fall, we were on the Atlantic fleet exercise and one night we were doing high speed maneuvers. There was a destroyer that radioed in clear. Well, they didn’t quite clear it, they just tore through about middle way on our ship,” he said. “When that ship hit, it destroyed the wash room. If any of us had been in it we would have been killed.

“There was a 3-inch gun mount and when the ship hit that, we lost five shipmates from that. We thought we were going to sink. The ship was gradually sinking, but it ended up stopping. Anything that you could find loose, you threw over the side. I was up in that gun mount and I threw – inch ammunition over. I reached down to grab one and it was a man’s leg. I had nightmares over that for years. I still have them once in a while, but not like I used to.”

With Carlson’s years of service behind him, he decided to attend college and earn a degree in pharmacy.

“Tuition at West Virginia University back then was $42 dollars. I went to WVU and I graduated in 1957 with a B.S. degree in pharmacy,” he said. “I wanted a degree in forestry or wildlife because I am an outdoor person. But, Annalee and her dad thought I ought to go to pharmacy school.

“They were taking only 40 students a year. I had to take an entrance exam and 185 signed up to take it. I was headed back from work at 10 p.m. on Friday night and I had to be in Morgantown by 8 in the morning to start the four-hour exam. I had to hold my head up to finish that test. On the Fourth of July I got a letter that said I had been accepted!”

After working for years, Carlson retired at age 62. However, that did not stop him from coming back to work.

“The people that I worked for wanted me to come back and work, so I worked until I was 68,” he said.

Carlson has many important women in his life when it comes to family.

“I am surrounded by women,” he said. “I have four daughters, three granddaughters and three sisters. I also had three brothers. My older brother was in the Navy for 23 years.”

Carlson currently lives in Dailey, where he loves to spend his time taking advantage of the great outdoors.