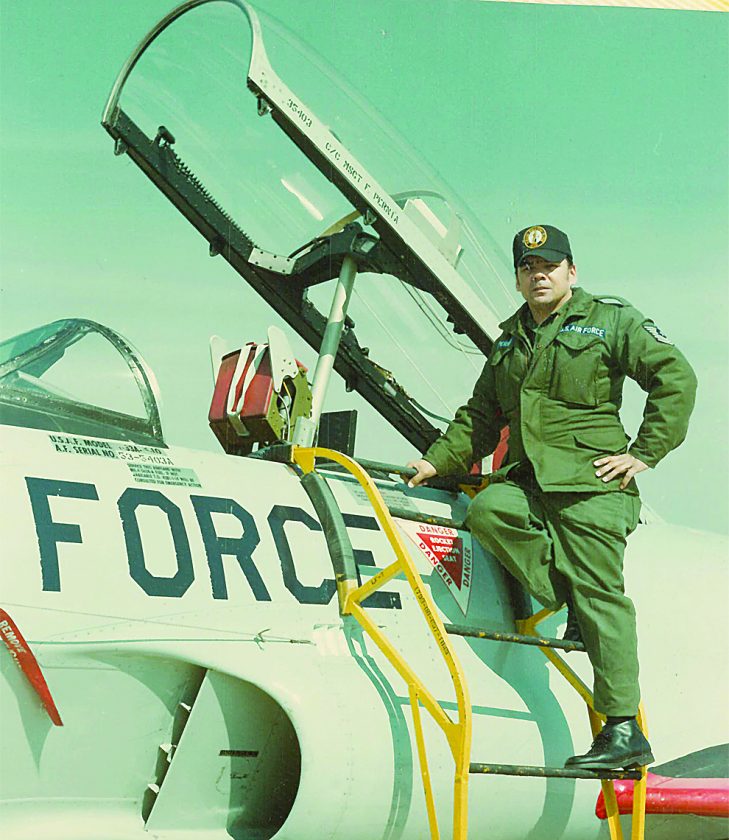 ELKINS — Florencio D. Pernia, like many 17-year-olds, chose to turn away from his former child-like behavior and instead, move toward becoming an independent leader.

In the 1950s, he decided to join the military at age 17, with his father’s permission.

“At the time, I was 17 and I was living with my father. I was kind of running around, getting in trouble. I thought, well, I should join the military,” Pernia said.

“I wanted to join the Air Force because I wanted to work on airplanes. At that time, you could join at 17 with your parents’ permission. I dropped out of high school and joined the Air Force. When they found out that I didn’t finish high school, they made me take the GED test. I passed all of them and got my high school diploma that way,” he said.

“I took basic training at Sampson Air Force Base in New York. That was in January 1955. In April, I went to Amarillo, Texas, for tech school for aircraft mechanics. That year in September, I went overseas to England. They had F-84’s in and later, they transitioned to F-100’s. I was there from 1955-1959 and I even met a girl there and we got married! I brought her back to the states with me. We were married for 42 years. She passed away from cancer in 2001.”

During his time in the Air Force, Pernia had many different duties.

“I was an aircraft mechanic and a crew chief. I had many many other duties,” he said. “I was what they called a flight control system supervisor. I did all of the aircraft rigging for flight controls, cables and that sort of thing on all of the airplanes. I was also an egress mechanic. I taught egress systems to people for safety.

“Actually, I got in trouble because of that. It was because I didn’t give my students a test. Of course the Air Force would come in to inspect and they would ask me where my test were. I told them that I didn’t give any. I said, ‘I teach them safety. I take them out to the plane and tell them that if they fire the seat, it goes 176 feet in one second straight up. If you are still conscious, you will get a beautiful view of your surroundings before you come back down.’

“I would teach them visually,” he said. “One of my students asked for a test. I responded by saying, ‘If you go out of here and you blow yourself out of this airplane, you failed. So pay attention!’ I believe in keeping it simple. The Air Force didn’t like that.”

While serving in the National Guard, Pernia took many educational courses.

“After I got out of the Air Force and joined the Guard, they had a program where you could take any educational correspondence course that you wanted, it didn’t matter where it was. So, I took one on safety, electrician, household, plumbing, air conditioning and masonry. I figured that one day I would want a house and I wanted to know what was going on with it, not to be an expert, but to at least have an idea about it,” he said. “I took every course that I could take.”

One of the greatest gifts that Pernia received from his time in the military was the family-like atmosphere that was created among those who served.

“It is mainly all of the comradery. If you needed something, everyone was there. The Guard was even more so because it didn’t matter what rank you were, you would be a captain or a lieutenant, but if you needed a roof on your house, you could say something and six or eight of us would get together and put a roof on your house,” he said. “We built our general’s engine in his Cadillac on several different occasions. If you needed help, everybody just pitched in.”

Pernia retired as a Senior Master Sergeant, which is an E-8 rank.

“I got that title after they took away my airplane because it was old. They told me that I had to find another job. At that time, as a full-time technician, I could take any position that I was qualified for,” he said. “I would take my little clipboard and walk around the hanger just looking around at the jobs. I had so many people worried that I would take their job because I was qualified. They had a position for night shift production control.

“I worked there from 1985 to 1993. I did all of the scheduling for aircraft. Inbound aircraft could call in and I would get their time and code number, then I would pass it on to the maintenance people. If anyone needed anything, they would come see me. I had these little books that told me where everything was. I knew where all of the bases were, and I knew the code names for all of them.

“When I got ready to retire, we had a commander that was right out of the Air Force, who didn’t have any understanding of how the National Guard worked,” he said. “She told me, ‘You are 55 so you are going to have to retire.’ I said, ‘OK! I’ll retire at 55.’ Well, when I left I took my little books with me. About a year later she called me and said that she made a mistake. She told me that she should have had me train somebody so they could know what you did, because they just couldn’t figure out how I knew all of that stuff.”

After Pernia retired from the military, he continued working for many years.

“I went to work for Raytheon for 10 years. It was only supposed to be a one year position, but I ended up staying for 10 years. At first, it was Surveyor, which is apart of E-Systems,” he said. “Well, E-Systems took over for the next five or six years and then Raytheon bought out E-Systems. They supply all of the parts for the aircraft that the Guard had for that particular unit. It was the same unit that I was in! So, I basically went from one side of the hanger to the other and this time, I had to wear civilian clothes.”

Soon after, Pernia came to Elkins and ended up falling in love with the charm of the town.

“I got to Elkins from going to hospice for a class,” he said. “That is where I met my wife. She was from Elkins and we see each other for almost a year. We would meet once a week and one thing let to another and we got married.

“When you grieve, whatever is on your mind you talk about. There were about eight people. Sometimes you would laugh, other times you would cry because it is hard when you lose a spouse. My wife lost her husband.

“Well, she talked me into coming to Elkins for a couple of her friends’ weddings,” he said. “In 2002, we were driving back to Maryland from being at the Forest Festival, and I said, ‘You know, I could retire in this little town, I like it.’ So, one thing led to another and here we are in Elkins.”