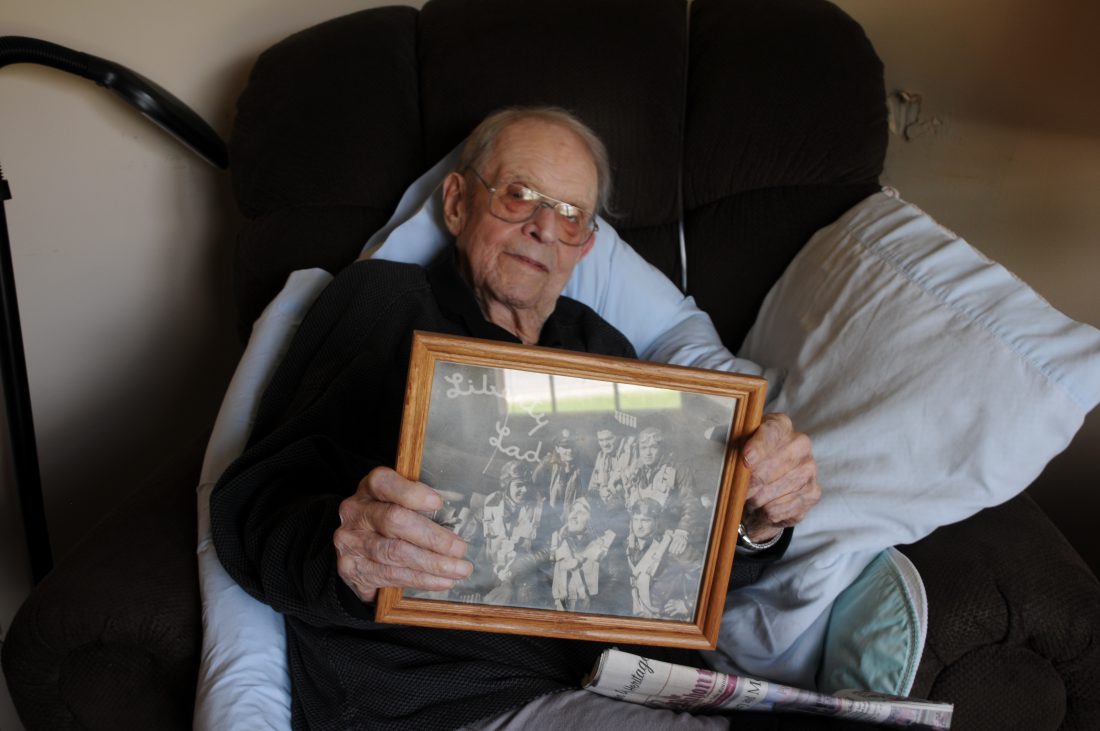 The Inter-Mountain photo by Brooke Binns Local veteran Lloyd ‘Dabney’ Kisner holds a photo of an air crew he served with on ‘Liberty Lady’— a B-26 — as part of the United States Army Air Corps during World War II.

ELKINS — A local 99-year-old World War II veteran recalls his flying missions during the war, several of which put him in tough situations.

While serving his country, Kisner recalls bailing out from his plane on two occasions.

“We were on a mission on the border of Germany and the airplane got hit. Robbie, the pilot, said, ‘You’re going to have to get out and jump.’ So, I hit the bomb bay doors and out I went. When I went out, I drifted — I still can’t explain why we drifted that way — but I drifted over the first town high and dry,” he said.

Kisner said he drifted over a second town and finally landed in the next town, still along the German border. Although he was followed through the air by the German troops, he was luckily not captured.

“I looked and saw an opening in an old fence on the end of town. … After running about four miles or better, I ran to the river,” he said. “There were wheat fields around the river and I heard dogs that I thought might be bloodhounds, so I backtracked myself to another trail I had been on, and sure enough, I believe I had fooled (the Germans).”

For several days, Kisner hid in an abandoned mine where a man and a young boy fed him. He said he would use a lighter inside the dark mine to make sure he could see every so often, and after several days of being in the mine, he tried to find his way out but was unable to do so.

Kisner explained he was eventually taken in by Belgians who helped to hide him from German soldiers. During this time, Kisner said his skills from back home were put to good use.

“They had a slaughter house and they butchered and sold black market meat,” he said. “I was there for around three weeks before I told them that I knew how. … I picked up a knife and started skinning the animal we were butchering – I skinned the game at home. So, when they found out I could skin, that was big time stuff for me. I skinned quite a bit after that. In fact, that was one of my bigger jobs.”

Over the span of several months, he and another American soldier were kept hidden by families in the area for their safety.

Kisner noted that when families would become fearful, they would move him, or other people who were in hiding, to another location.

In addition to posing as a butcher, Kisner said he was moved to another homestead where he posed as a baker for a short time.

Despite help from the Belgian underground, Kisner remembers having several close calls while hiding from the Germans.

Kisner and the other American soldier were hiding inside the walls of the house where they were staying when Germans were conducting a search of homes in the village.

“I went to a place to hide out, and they fixed up a place in the attic for us. They put paper over the walls and pushed a cabinet up against the wall where we would get in the wall. Then, one time (the Germans) came in the house and up into the attic, and they walked right by my face where I was in the wall,” he said. “If they would have stopped to listen, they could have heard my heartbeat.”

Kisner said he was able to have some communication with the people who helped him survive, but he noted long periods of time would go between conversations due to language barriers and the fear of being discovered by Nazis.

One notable mission Kisner recalls was when he and his flight received orders to bomb a target near London.

“We went in to bomb a target, and we bombed it, but it was an old dummy that they set up for us,” he explained. “When we got to the target, we flew a circle and saw that two old targets down below us had been fixed up. When I was looking at them, I saw a mark up on the mountain. I thought I was going to hit the other one (on the mountain) and I did, which is a no-no. … When it went off, it went off pretty big.”

Kisner went on to explain the target on the mountain he fired on turned out to be one of Adolph Hitler’s missile bases firing on London.

“We went on home to return back to England, someone said, ‘Kid, I hope you’re right,’ and I said, ‘If I’m wrong, I’m wrong,'” he said. “When we landed, here came the colonel out to meet me. … When I got out of the airplane, I figured I was going to get chewed, and he said ‘Kid, you tore it up.’ It kind of surprised me because I was expecting to get chewed out for firing on the wrong target but it worked out real good. I think I did get some chewing, but they still gave me credit for it.”

Kisner, who now resides in Elkins, will celebrate his 100th birthday on Oct. 13.