Lemons served in the National Guard in U.S. and Germany 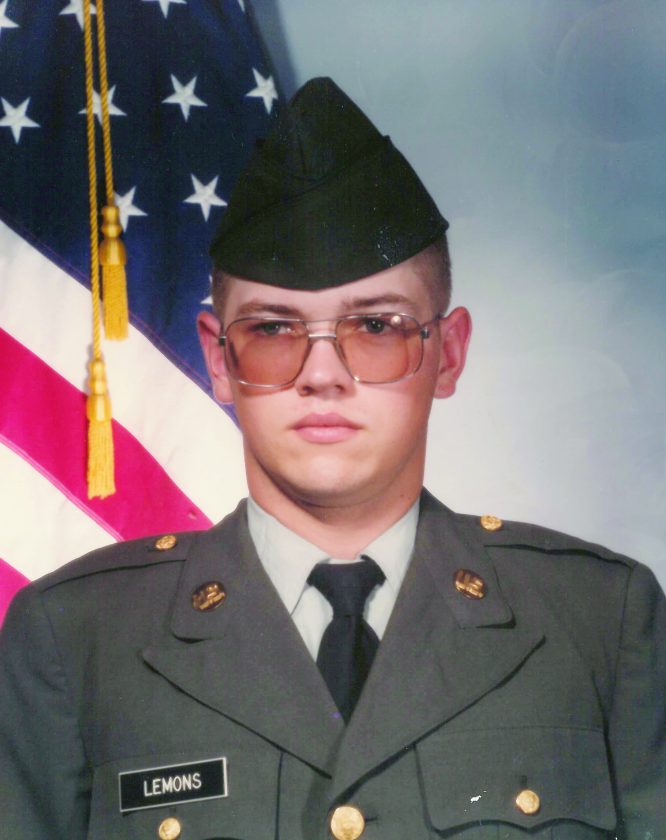 PARSONS — Richard Lemons served in the U.S. Army National Guard for a total of 15 years, working his way up to the rank of sergeant.

At only 17 years of age, in September 1987, Lemons decided to enlist in the Army National Guard after debating on whether or not it was the right decision for him. Serving as an inspiration to his decision process, Lemons looked to his grandfather, who was a veteran.

After some time had passed, Lemons received his family’s permission, which sent him on his way to enlist in the journey that he would remember as being very rewarding.

“I looked into the military several years before I joined,” he said in a recent interview. “It was a long process of decision making and when I was 17, that’s when I could legally sign up with a parent’s permission. I went to them and asked them after I told them what I wanted to do and they were more than glad.

“My grandfather is a U.S. Navy World War II veteran. He served in the Marshall Islands as an airplane mechanic. He was my main inspiration to join the military. I graduated from Buckhannon Upshur High School in 1988. One week after I graduated from high school, I was sent to basic training in Fort Leonard Wood, Missouri.”

Lemons hoped to achieve a career in the military. Not only did he gain an education, but he enjoyed every minute of his service, he said.

“For the military police, I was a traffic accident investigator. So, any accident that would happen on the base, we would get called out and we would do an investigation on the accident. I loved both of them but my favorite position was equipment operator. I got to go to Germany with those. Germany was the only overseas tour that I went on. Everywhere else, I spent in United States.”

“My favorite part of being in the National Guard was getting to help people out during emergency duties, flood duties, snow duties and just helping the community in general,” he said.

He also enjoyed traveling with the men and women he served with throughout the state of West Virginia.

“That was a big joy. I am still friends with a few of them,” he said. “We have all been scattered in the four winds as they say, so it is kind of hard to keep up with everybody.”

One event was foremost in Lemons’ memory of his service.

“The one that sticks out most is the flood of ’96 in Petersburg,” he said. “I was living in Parsons at the time and my house had actually flooded as well. I had 8 inches of water in my house and I got activated and sent to Petersburg for flood clean up. That was hard. I had to leave my wife to handle it.

“Later on in ’96 we had another one in Parsons and they assigned me the task of overseeing that project. In 2000, we were down in McDowell County, down in Welch and in that area. I was with the MP’s then. We provided traffic control and also just ensured that the troops remained safe when they used operative equipment. It was rewarding trying to keep them safe so that they could all go back home.

“We had two or three other states with us at the time,” he said. “Members of one in particular was the South Carolina National Guard. They came up and assisted us. They sent up an engineer unit also to help clean up. I’ve been just about all over the state for flood clean-ups. You get one finished up and then you run to another.”

“It was hard,” he said. “I have two stepkids and one of my own. There was a lot of time apart, especially with the wife. We were married in June of ’90 and I took off and left for two weeks to go to annual training. Our annual training usually fell right around June every year so for several years, we didn’t get to celebrate our anniversary together,” he said.

“My youngest daughter grew up seeing me leave in a uniform one weekend a month and for two weeks out of the year. She grew up watching me, and my wife said that I was kind of strict. But, the thing is that it is just your mindset that you put yourself in to.

“My other daughter was around a little bit while I was in the military, but not for long. But, she got to see her mom being at home by herself for two weeks and when I would be gone for annual training. All of the kids got to come out for family day, so I got to see them there, which was nice,” he said. “Later on, when my son was dating my now daughter-in-law Marcia, I discovered that she was a member of my old unit, the 119th. So, it is pretty cool because we have a lot of stories that we tell about people that we know.

Once Lemons finished his 15 years of service, he was notified that it was time for him to take his retirement.

“It was a bittersweet moment when I got notified that I had to retire. My unit was getting ready to deploy in ’03 to the desert. I went over to see them off and it was hard. We trained together and we were family,” he said. “That is the biggest thing in the National Guard: you are a family. You know everything about each other’s kids and if you need something, you just pick up the phone and they were there. It was bittersweet to watch them go off when all of us had been preparing for that moment for a while. They all came back safe and sound.”

After he retired from the military, Lemons went back to his civilian job.

Overall, treasured the experience and that time that he dedicated to serving his country.

“I wouldn’t change my experience in the Army National Guard for the world. I enjoyed every minute of it,” he said. “It takes a young person, and shows them how to grow up. Being on my own, fresh out of high school one week and then sitting hundreds of miles away from home with nobody there. We all formed friendships pretty quick. We relied on each other. Teamwork pulled us through and friendships pulled us through. It was scary but at the same time it was exciting. It makes you grow up and it makes you take on more responsibility. Also, it makes you think, ‘This is my life and this is what I have to do to control it.'”

Lemons currently lives in Parsons with his wife of 29 years, who was by his side throughout his service.