Polesnak served in the U.S. Air Force during Vietnam era 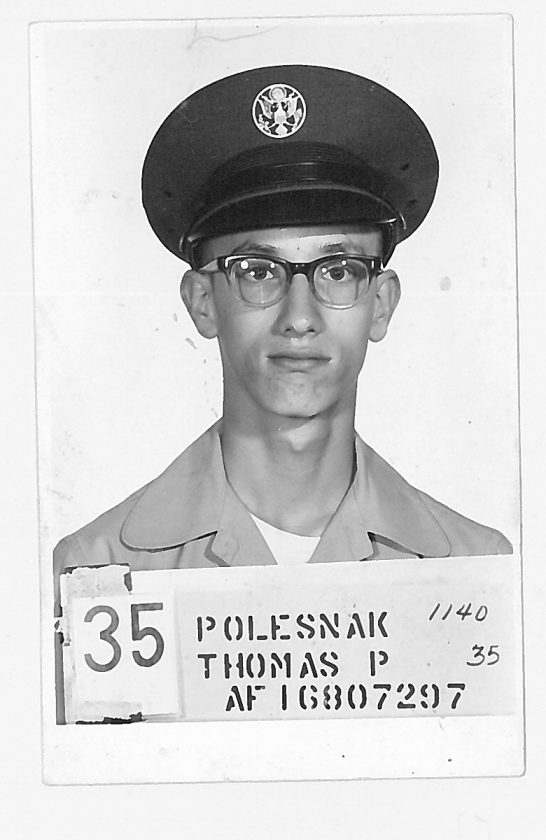 Submitted photo Tom Polesnak enlisted in the U.S. Air Force at age 17 in 1964.

ELKINS — Elkins resident Tom Polesnak served a total of 20 years in the U.S. Air Force, retiring as a technical sergeant.

The Detroit native enlisted in the Air Force at the age of 17, attending Leaders Encouraging Airman Development (LEAD) in September 1964, and was active during the Vietnam conflict, both Gulf Wars and the Bosnian War.

“My recruiter was a dead ringer for Andy Griffith, and he said, ‘Son, this isn’t going to be easy,’ and it wasn’t,” said Polesnak in a recent interview with the Inter-Mountain. “Basic was tough, but I made it through.”

Polesnak said his decision to join the USAF was made partially because of the draft.

“I was going to turn 18 and thought that I would get drafted into the Army, but I wanted to go in the Air Force,” he said.

He has vivid memories of his first night in the service.

“I had a nightmare that I was being chased through the jungle by the Viet Cong,” he said, recalling the warm night on Lackland Air Force Base in San Antonio. “Just as they caught me, the lights in the room came on. My roommate said that I looked like I’d seen a ghost.”

“I was tired and didn’t get much sleep on the plane,” he said. “It took a little while, but I got better. The Air Force was a whole different world.”

Upon returning home from the early part of his military career, Polesnak obtained a master’s degree in business management from Central Michigan University and got married to his wife, Karen.

After a 20-year break from the service, Polesnak returned to the service to work as a weather forecaster.

“I always had an interest in weather. I can remember laying out on the grass when I was three or four years old, looking up at the sky and noticing the clouds going in two different directions.”

Polesnak traveled to Bosnia, where he served for five months.

“It was a really good experience. I actually volunteered for Bosnia. I was working full time and was with the Virginia (National) Guard at the time,” he said.

Polesnak said his decision to volunteer was in the hands of two people– his wife and his boss at his civilian job, both of whom encouraged him.

Initially, Polesnak was stationed on Tuzla Air Force Base but was soon transferred to Camp McGovern.

“They would be discussing the weather for almost an hour and a half. I wasn’t really happy there. So, they sent me to Camp McGovern,” he said. “I was the only weather person there, and that was much better.”

Polesnak briefed approximately 40 Army officers about the weather around 7 a.m. every day.

“The first week I was there, I told them that we were going to get rain one day. They looked at me and said that Tuzula said freezing rain. I turned out to be right,” he said.

“I was able to put my own forecasts together, and I got 95% accuracy. I had to keep an eye on the sky. If any kind of weather was moving in, they had to stop the operations because they had to have pretty much clear skies up to about 20,000 feet.”

“There were a few times I had to tell them to stop everything,” he said.

One of Polesnak’s most memorable moments in Bosnia occurred when he accurately predicted a rare weather phenomenon.

“One Sunday I predicted thundersnow. I went to the theater and all of the sudden… Boom! Thunder. I looked outside, and it was snowing,” he said.

“It gave me a good feeling. A lot of people trusted me.”

Overall, Polesnak maintains positive feelings toward his time in the service.

“I think I have more confidence in myself. When I graduated from high school, I just didn’t know where I was going to go. When I went in the service, I gained confidence. I never wanted to appear like I was a coward or couldn’t do something,” he said.

During his time in the service, Polesnak was awarded approximately 20 medals.

After returning home from Bosnia, Polesnak returned to his civilian job as a senior systems analyst in Arlington, Virginia, where he continued to work until 2011.

“I got my old desk back and everything. It was almost like I wasn’t even gone from work,” he said.

Active in the American Legion, Polesnak currently lives in Elkins, where he works as part of the mailroom staff at The Inter-Mountain.