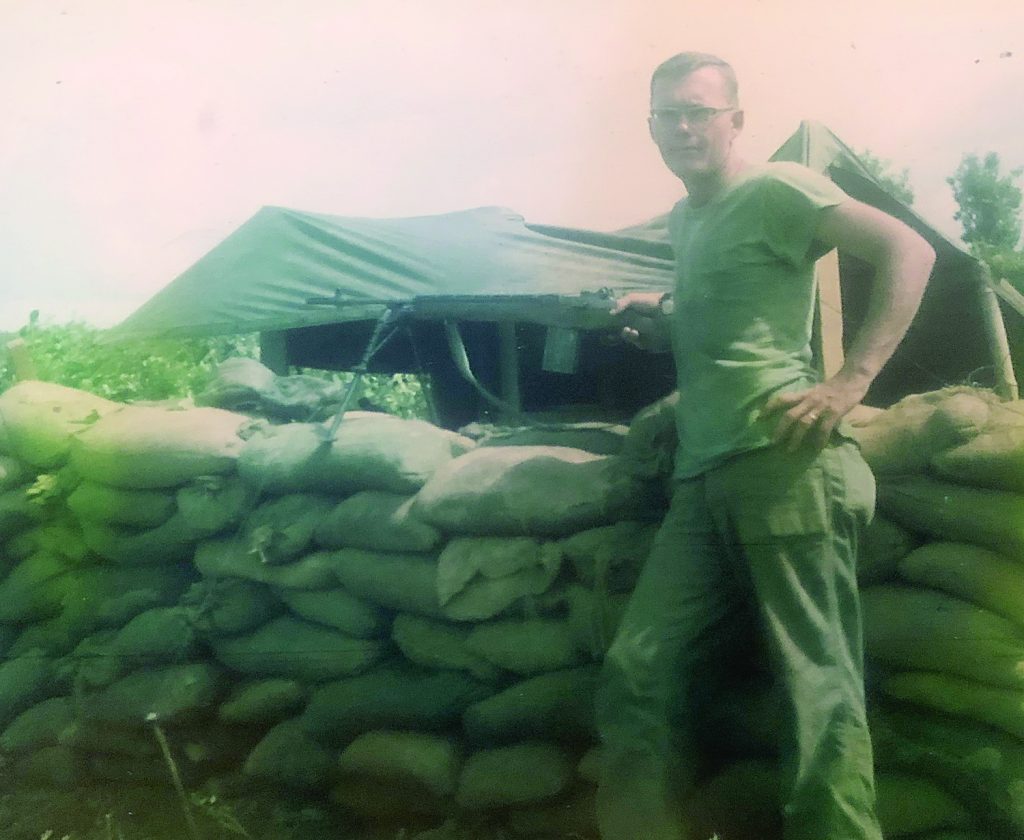 BUCKHANNON — An Upshur County man who earned a Purple Heart after being injured in Vietnam is continuing to serve fellow veterans.

“I enlisted in the Marine Corps on March 8, 1964,” Ed Smith said. “That was prior to graduating from high school and I went to Charleston and got swore in.”

Although Smith’s father served in the U.S. Army and two uncles were in the West Virginia Air National Guard, Smith had an uncle who was a career Marine and two other uncles who served in the Marines during World War II. That led him to choose the Marine Corps.

Smith finished his senior year at Terra Alta High School, graduated and then left for Marine boot camp on June 22, 1964.

“I was told by one of my uncles ‘be quiet, pay attention to what they want you to do, do as you are told and you will get along just fine,'” he said. “That’s about the way it worked out.”

After Parris Island, Smith went to Camp Geiger – a small base attached to Camp LeJune in North Carolina and received advanced infantry training for four weeks before receiving 10 days leave to come home to West Virginia.

He then was transferred to Camp Pendleton in California where he trained continuously until orders were received for deployment to Vietnam in August 1965.

The summer before deployment, Smith returned to West Virginia and married his wife, Jane, on June 5, 1965.

Smith was in the infantry and spent three months in Vietnam before being injured on Nov. 15, 1965.

“There were 11 of us on patrol and I was number 10 in the line,” he said. “Word was passed back to watch out for big hole. We were going through grass that was shoulder high. How nine other people missed that trip wire, I have no idea. I was the one who snagged it. Of course, it went off.

“I got hit on the right side and it tore my jacket up, tore my rifle up, tore a lot of my magazines up. It caught me in the hip, right leg, left leg and a small piece of shrapnel went in my right arm. My fire team leader – it blew him clear over in the rice paddy. He broke a couple bones in in one hand and took a pretty good hit in his right knee. They called the chopper in and loaded both of us in. That particular day, we didn’t have a medic with us. They brought us back to the aid station and did everything they could there.”

The team leader’s injuries were not serious enough and he returned to duty but Smith was flown to Clark Airbase in the Philippines for the night and then to a hospital in San Francisco.

There, the American Red Cross made arrangements and Smith was able to call home to West Virginia for the first time since he was deployed. Until the phone call, all the family had was a telegram saying Smith had been injured.

Smith and some others were flown back across the United States, making stops along the way until he made it to Bethesda Naval Hospital about Nov. 18 or 20.

There, he remained until early January 1966.

After being discharged from the hospital, Smith spent two to three weeks at Camp Henderson and was transferred to Parris Island where he finished out his Marine Corps service.

“I wound up being the NCO in charge of the base theatre at Parris Island,” he said. “It was run by Special Services.”

After being discharged from the U.S. Marine Corps on June 21, 1967, Smith returned to West Virginia and he and his wife moved to the Bradenton, Florida area. Then, an opportunity came with Columbia Gas and Smith moved back to Charleston, West Virginia and was later transferred to the Buckhannon area in 1980.

“The Purple Heart Medal is not one you try to go out to get,” Smith said. He also received other medals for his tie in the service including the Vietnam Service Medal and National Defense Medal.

It was after retirement from Columbia Gas that he became more involved in veterans service organizations.

“The more members the organizations have, the more power they have to try to get legislation through Congress,” he said. “I think the American Legion and the VFW are probably two of the biggest organizations for veterans I can think of. Each of them does a part in everything that does get through Congress.”

For nearly the last three years, Smith has served with the Upshur County Honor Guard which has a presence at various ceremonies but also performs the 21-gun salute at funerals of veterans.

“I think that is something that is really special,” he said. “Bob Post got me started in that and I try to not miss any more of them then I possibly can. We are short-handed.”

Smith also has two children, Susan and William who both graduated from Buckhannon-Upshur High School, nine grandchildren and one great-grandchild.”

Reflecting back, Smith said he would choose his Marine service all over again. He also feels bringing a draft back could be influential in teaching young people responsibility and discipline.

“You would have to serve two years in the military,” he said. “To me, that’s not quite a bad idea. You do learn discipline. A lot of things I was taught in boot camp, I still do today.”