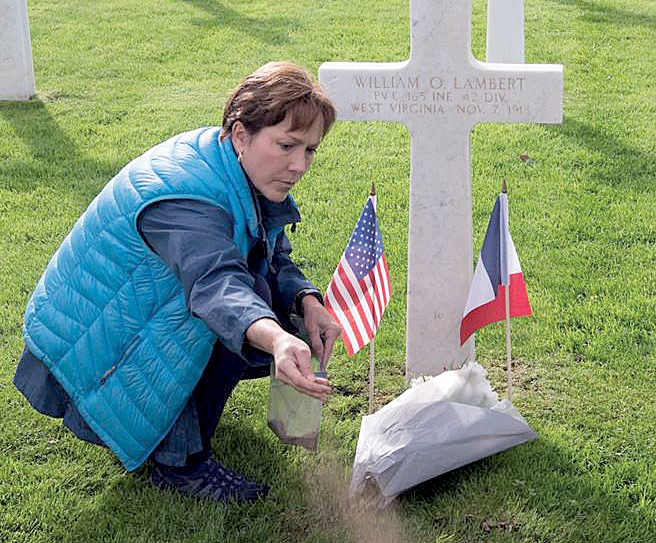 Submitted photo Brenna Mitchell spreads dirt from the graves of the parents of Pendleton County native and World War I soldier William ‘Orbry’ Lambert beside his headstone at the Meuse-Argonne American Cemetery in France in October.

PENDLETON COUNTY — William “Orbry” Lambert, a Pendleton County native and U.S. soldier who was killed during World War II, was buried in France in 1918. Now, more than 100 years later, author Brenna Mitchell has honored him with a sanding ceremony.

Mitchell, also a Pendleton resident, has written a book, “Pendleton’s Boys of ’17,” which details the lives of the 463 Pendleton County natives who fought in WWI.

Lambert was born in March 1896 near Circleville. His mother passed away in 1909 and he and his brothers were sent to live with relatives.

“By 1917, Orbry was working at the North Fork Lumber Company in Boyers, West Virginia,” Mitchell said. “He registered for the draft that same year, and although it’s unknown exactly when he was called to serve, he sailed to France on deployment Aug. 22, 1918.”

“In the end, the French occupied Sedan,” she said. “The Armistice was signed four days after Orbry’s death.”

Sixteen other boys from Pendleton County died during WWI, and all were brought home but Lambert, Mitchell said.

“Some Americans, like former President Theodore Roosevelt, felt the warriors should remain where they fell,” she noted.

When Mitchell heard Lambert’s story, she decided to request a sanding ceremony for him. She gathered soil from the graves of his parents, grandparents and brothers in Pendleton and Rockingham County.

Upon arriving at the Meuse-Argonne American Cemetery in France on Oct. 10, she made sure American and French flags were placed on Lambert’s grave. Mitchell sprinkled the soil over Lambert’s grave “so that he may now rest beneath native soil even though he was not brought home.”