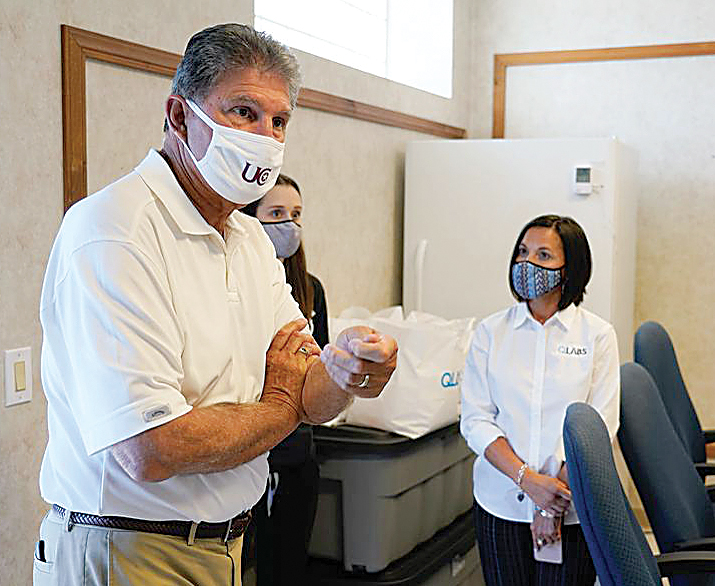 CHARLESTON — Along with his colleagues in Congress, U.S. Sen. Joe Manchin, D-W.Va., is back in Washington, D.C., working on the details of the upcoming COVID-19 congressional relief package.

In preparation for this week’s work in Congress, Manchin met virtually with state leaders and lawmakers for a feedback session and to discuss future Congressional funding.

Manchin and his staff in West Virginia and Washington, D.C., hosted dozens of leaders on call, which lasted more than 90 minutes.

Over the course of the session, panelists representing more than 40 organizations throughout the state were encouraged to share their insight on previous federal CARES Act funding, specifically where they had encountered difficulties in their respective industries, and emphasize their organizations’ greatest needs from future CARES Act funding.

Speaking on behalf of the state’s health departments, Bill Kearns, executive director of the Berkeley County Health Department, said budget and staffing cuts that preceded the pandemic had complicated operations during the ongoing public health crisis.

“We’re addressing COVID-19 with every bit of passion we have in us,” Kearns said. “We certainly have seen our share of losses in revenue over the years, but in this pandemic we’re dealing with, we’ve experienced losses over a couple million dollars in health departments between extra staff time and overtime and loss of revenue from programs we normally received.”

Half of the state’s health departments, he said, were currently operating with “less than 90 days’ worth of cash” on hand. Kearns said the financial crunch has been felt beyond the coronavirus response.

“We’ve seen reductions in the immunization programs, and even worse, in our harm reduction programs,” Kearns said. “We’re two short months away from influenza season when we get our boots on the ground for vaccination clinics… When we have limited amounts of staff, it makes it so difficult to try to address every need of our community with limited funds and personnel.”

“In recent weeks and months, hospital closures across West Virginia gained a lot of attention, but overlooking those discussions, we’ve had more than 70 ambulance agencies close over the past decade plus, and this COVID situation has compounded the financial struggles of these agencies,” Hall said.

Many EMS facilities, he added, are not affiliated with a political subdivision – a city or county – and therefore did not receive support. Hall said EMS personnel would like to see Congress distributing support to all agencies to prevent funds from getting “held up” at the state level before being sent to cities and counties.

Hall also called for a reimbursement in on-site care that did not require transport. Because ambulance agencies are only paid if they transport patients, Hall said, agencies are facing lost income due to the fact that many patients are now refusing transport out of fear of contracting COVID-19 from hospitals. Hall also requested liability assistance to protect first responders working in the field during the pandemic.

“We aren’t like other providers because we aren’t operating in a controlled environment; we’re not in a clinic or a hospital,” Hall said. “We’re going into peoples’ homes, we’re providing care on the side of the road, it’s more difficult to maintain an environment and prevent the spread of COVID-19. We’re really concerned about liabilities for COVID… our healthcare heroes should be focusing on lives — not lawsuits.”

Fred Albert, president of the American Federation of Teachers West Virginia, and Sarah Tucker, chancellor of the West Virginia Higher Education Policy Commission, spoke to the concerns educators, personnel and students are facing with the upcoming school year, including online learning support and funding to support COVID-19 testing and adhering to Centers for Disease Control and Prevention guidelines.

“Our educators are very concerned,” Albert said. “They want to go back to school. They want to be face-to-face with their students. That’s what they love doing, and nothing will ever replace that, but it’s a scary time right now. They’re concerned for themselves, the personnel and their students.”

“We also ask for assistance around online learning,” Tucker added. “Our low-income, first-generation rural students are not able to access education. We need a fix, and we need it fast; we can’t wait for the middle mile or last mile to be built.”

Tucker also emphasized the harsh reality many universities were facing with revenue and enrollment losses.

“We’re staring down the possibility of closing multiple colleges this fall, so we ask for flexibility in any funding that could be directed toward the institutions, particularly to replace lost revenue,” she said.

Thanking Senator Manchin for his efforts to encourage President Trump’s administration to use local media to inform the public, Don Smith, executive director of the West Virginia Press Association, said the PPP funding helped many community news organizations survive the initial impact of the virus. Additional funding support for be helpful for all media operations. Moving forward, Smith said, using media at the community level, through advertising and reporting, would service the local public and the news industry.

On behalf of the West Virginia NAACP, President Owens Brown requested additional assistance for African-Americans who have been disproportionately affected by the ongoing pandemic.

“In African-American communities, coronavirus has been devastating due to different health and economic disparities,” Brown said, offering suggestions for relief. “… We need a short-range plan and a long-term commitment.”

Brown also advocated for a safe, supportive space for undocumented residents who may be afraid to get tested for fear of deportation.

Joyce Yedlosky, team coordinator for the West Virginia Coalition Against Domestic Violence, said delays in CARES funding had caused complications for the coalition. Funding has not yet been received to help support the influx of victims fleeing unsafe environments. Some victims, she added, had been directed to overflow shelters and hotels.

“[In the stimulus package] there was $45 million allocated for domestic violence programs, and two things went wrong,” Yedlosky said. “First, we haven’t received it yet due to some state bureaucracy… when it does get there, it’ll be approximately $13,000 for programs. That leads to us asking to continue to provide funds for programs and to be able to help the increasing numbers of victims.”

On behalf of the hospitality and travel industries, Carol Fulks, executive director of the West Virginia Hospitality and Travel Association, spoke to a need for return-to-work incentives and ways to create job opportunities for those who are still unemployed.

Unemployment compensation for those in the industry, Fulks said, was still a “real problem.” In larger businesses, she said, 30-50 employees had not yet returned and in smaller settings, three to five were still missing.

“We just need some return to work incentives – we really do,” she said. “Assistance with street closures would help maybe if you could close the streets for venues for restaurants and entertainment. Then we could hire and use more staff. That might be another opportunity.”

A bipartisan group of state senators and delegates also joined the conference call to share input on federal coronavirus funding. Democratic legislators, including Delegate Shawn Fluharty, D-Ohio, have been critical of Governor Jim Justice’s handling of the $1.25 billion the state received from the CARES Act, including his decision to not call the legislature back into session to appropriate the federal funds.

“We should be angry by now at what’s going on,” Fluharty said. “We’ve been inundated with emails and phone calls about the dire straits West Virginians are in right now, and to have that money essentially just sitting there, unspent.”

State Delegate Mick Bates, D-Raleigh, held up an annotated copy of Governor Jim Justice’s proposed CARES Act spending, which calls for $200 million of the $1.25 billion the state received through the CARES Act to be distributed to local governments. However, as of July 13, only $16.8 million had been distributed to local governments, according to data from the West Virginia State Auditor’s Office.

“One of my suggestions is that you don’t send the state of West Virginia any more money until we have a process in place to make sure it is spent the way it’s supposed to be sent,” Bates said.

Delegate John Mandt, R-Cabell, expressed gratitude for the opportunity to gather and hear panelists’ perspectives. For small businesses, Mandt asked about the possibility of penalizing those who take advantage of the Paycheck Protection Program.

“I have seen and heard of abuses [in the PPP],” he said. “Can we put some penalties in there for people who abuse the [Paycheck] Protection Program? Because there are a lot of people who need it.”

Though in-person town halls are off-limits due to state gathering limitations, Manchin said he hoped to host more virtual forums in the future.

“We want to hear from everybody and stay on top of this until we get this COVID-19 behind us,” Manchin said.

ELKINS — Due to overwhelming safety concerns with COVID-19, the United Way of Randolph County will take a ...