ELKINS — The Elkins High School class of 1968 recently celebrated its 50th class reunion with a full weekend of activities. Classmates, guests and friends were welcomed July 27 at an informal gathering at Vintage restaurant, compliments of Bill Brown and classmate Brenda Gainer Brown ... 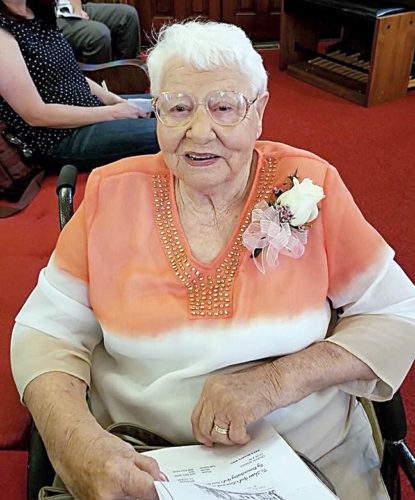 BELINGTON — On April 27, 1940, Don Lipscomb and Pearl White were married, uniting the White and Lipscomb families. Pearl White Lipscomb is the last remaining of those original families, at age 97. She grew up in Elkins, and graduated in 1940. Pearl and Don had four children. David, ...

The 2018 Shreve/McCauley reunion took place May 26 at the Izaak Walton League clubhouse on the Files Creek Road in Beverly. Those attending were Reeda and Hootie Arbogast of Norton and Montrose; Richard and Irene Shreve of Beverly; Bridgette and Tommy Livesay and children Isaac Livesay, ... 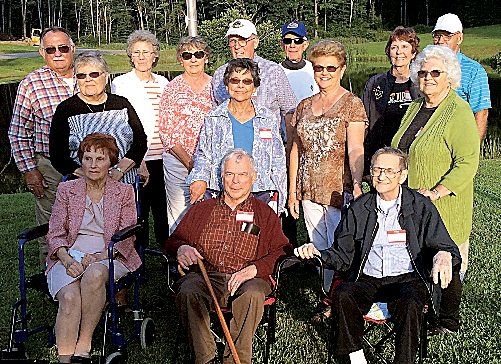 The descendants of Charles and Charlotte Righman Auvil gathered Sept. 10 at New Beginnings Church to celebrate the 18th annual Auvil reunion. After the blessing, a covered-dish dinner was served. John Edge was surprised with a birthday cake to celebrate his 70th birthday. Those present and ...

ELKINS — Recently celebrating their 60th graduation anniversary were 40 classmates of the 1957 class of Elkins High School along with their 27 guests. The fun-filled weekend started the evening of July 21 with an informal gathering at the home of classmates Dale and Pauline Newlon. ...

ELKINS — With the passing of another year, Tygarts Valley High School class of 1964 met on the afternoon of Aug. 19 in the open air Armadillo Flats at CJ Maggie’s in Elkins for their 53rd annual get together. Twenty class members, with their spouses and guests, attended the event. The ...

Members of the Tygarts Valley High School class of 1962 met for a 55th reunion Aug. 19-20. The reunion began Aug. 19 at Duke’s Steakhouse with a social hour followed by dinner. During the program there was much laughter when old memories were shared. Class officers Phillip Lantz and ...

The 73rd annual Cooper reunion was Aug. 13 at the Mountain Farm below Harman. Tom Cooper shared morning devotions. He said God’s original plan was for us to dwell with him. We lost that in the Garden of Eden where Eve was tempted by the serpent (Satan), he said. God is merciful, gracious ...

Members of the Tygarts Valley High School class of 1962 met for a 55th reunion Aug. 19-20. The reunion began Aug. 19 at Duke’s Steakhouse with a social hour followed by dinner. During the program there was much laughter when old memories were shared. Class officers Phillip Lantz and ...

The descendants of William and Armeda Sutton of Pickens gathered at the home of grandson James and Linda Summerfield, of Rawlings, Maryland, for their annual family reunion. After a potluck meal, a silent auction was conducted. A generational cookbook was shown and available for purchase. The ...

The family and friends of Warwick and Maggie Karickhoff gathered to honor their memories and also the memories of their children who also have passed, Audrey Kincaid, Roxie Simons, Virginia Keller, Elsie Crider, Snow Dear Ward and Earl Karickhoff. Their living children are Tula Curkendall, ...

The 53rd Howes reunion was Aug. 7 at Indian Camp. It opened with President Junior Howes saying the blessing.The business meeting opened with the group remembering the late Donovan Capocciamia and praying for cancer patient Krista Bond and all the lost loved ones. Howes said the prayer and ...

The 72nd annual Cooper Reunion was Aug. 14 at the Dry Fork Recreation Center below Harman.Tom Cooper shared morning devotions. titled "The Greatest Reunion of All." He told stories of experiences and situations he had gotten into. He brought laughter to the small crowd. He read statistics of ...

ELKINS - The Tygarts Valley High School class of 1964 met at Duke's Steakhouse in Elkins for its 52nd class reunion. A wonderful evening was enjoyed by all who attended. The efforts of David Matthew and Richard Judy in planning the special event were greatly appreciated by their classmates.A ...

The Elkins High School class of 1956 recently hosted its 60th class reunion.Harold and Julia Elbon and Bill Hartman hosted a Friday evening get together at Railyard Restaurant.The group attended the Saturday afternoon Hall of Fame ceremony honoring the class of 1956 track team and the Franks ...