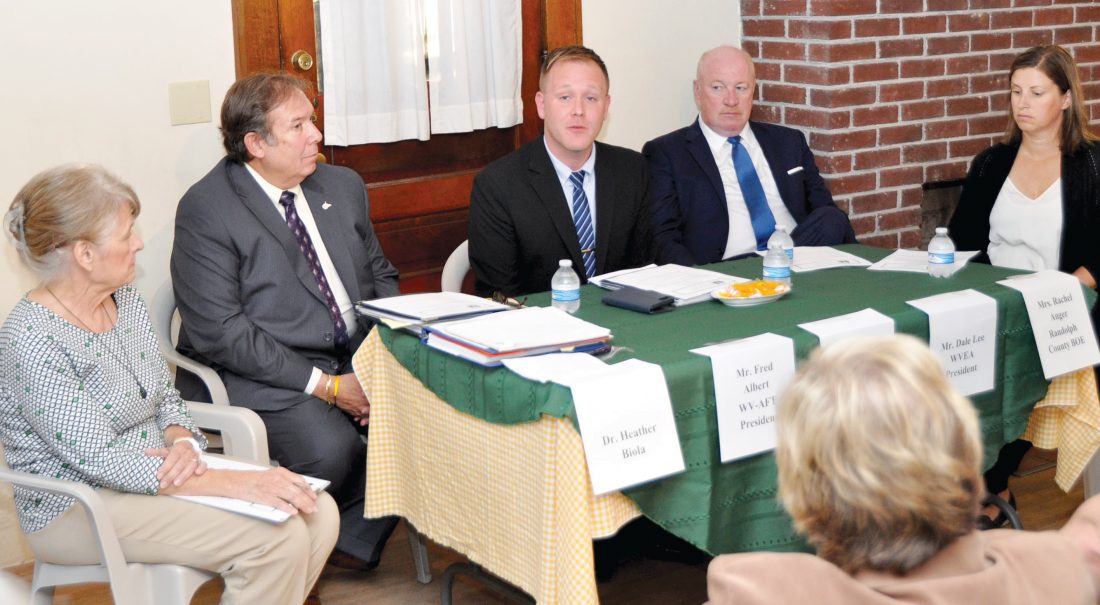 The Inter-Mountain photo by Brad Johnson Taking part in the education forum were, from left, moderator Dr. Heather Biola of the Kump Education Center; Fred Albert of the American Federation of Teachers-West Virginia; Delegate Cody Thompson, D-Randolph County; Dale Lee, president of the West Virginia Education Association; and Rachel Anger, vice president of the Randolph County Board of Education.

ELKINS — Charter schools and teacher position vacancies were among the topics discussed during a community education forum.

The forum was moderated by Dr. Heather Biola of the Kump Education Center.

Biola asked the panel about the process for implementing new public charter schools according to House Bill 206, the omnibus education legislation passed by the West Virginia Legislature last July.

“First and foremost, I’m not a fan of charter schools,” said Thompson, who is a Randolph County social studies teacher. “But HB 206 limits charter schools to three per year and that can’t happen until the year 2023. After that every three years, three additional charter schools can be authorized… The county board of education would have to vote to authorize that charter school …

“Because of the charter school revision to this bill, the damage that will do to our public school system, draining public funds from our public schools into a private corporation entity, I cannot support that,” Thompson said.

“We’ve had innovation zones in statute since about 2010,” Lee said. “What innovation zones do is if the staff of a school comes together and 80 % of them decide there are waivers they want to ask from the state regarding statutes and codes, then they come up with a plan to do that and submit those ideas to a state department panel. That’s worked extremely well for six years,” he said.

Albert said he doubted charter schools would have a positive effect on education statewide.

“Look at the rural outlay of our state,” Albert said. “Charter schools would probably not give us significant increases in student achievement.”

“They come in, they set up a charter school. It doesn’t work out, for whatever reason. They pull out. The public schools have lost that money, and it’s not easy to regain that money,” he said.

Anger said the new legislation will have local effects.

“We’re still learning about House Bill 206, and what we’re going to be expected to do … We did have to meet every year with the school’s LSICs (Local School Improvement Councils). Now they say we only have to meet with the underperforming LSICs,” she said.

“As a group, our board said we want to continue to meet with all the schools’ LSICs,” she said. “We still want to hear from them. We still think it’s valuable.”

The panel also talked about the issue of teacher position vacancies, which they said is a problem statewide.

“If a student is good at math, some corporation is going to offer them bonuses and a better salary and grab them up, because they need them, too,” Albert said.

“We have to look at the whole profession. Some schools of education are closing because they’re not getting enough students to attend,” Albert said, saying teachers’ salaries must be increased to attract more young people to the profession. “We knew there was a shortage coming, we’ve been saying it for years. And now it’s here.”