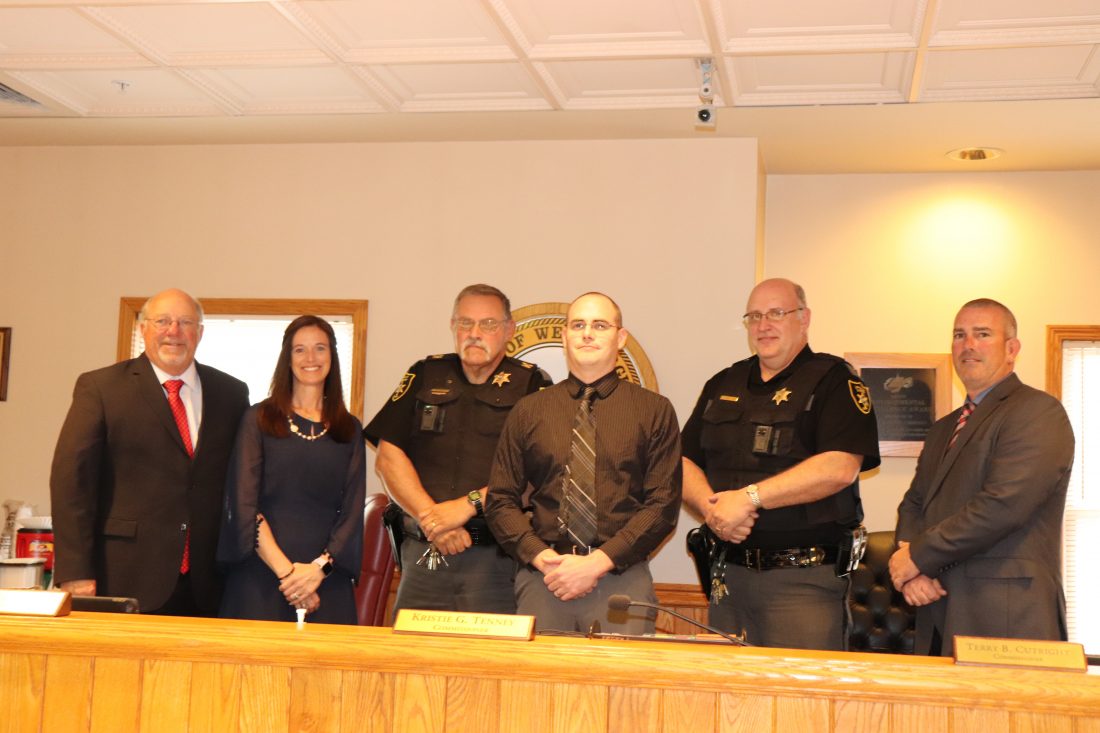 BUCKHANNON — Upshur County Sheriff’s Department newest deputy will be able to hit the road sooner than most as he is already a certified police officer.

Barcus also performed very well on the written test, coming out “on top,” he added.

Commissioner Terry Cutright noted that the starting rate was higher than normal but that Barcus came already certified and moved to hire Barcus, seconded by commissioner Kristi Tenney. The motion passed unanimously.

The commission also voted to institute a fee for building permits that are in the floodplain of .25 percent for residential and 1 percent for commercial based on the value of the project.

Upshur is one of only seven counties in the state that does not charge for building permits in the floodplain.

Commission president Sam Nolte said that Upshur County building permit officer Terri Jo Bennett researched what other counties did such as the flat rate or the percentage of the project.

The revenue collected will go into the commission’s budget which will pay for floodplain and addressing and mapping expenses.

Before the fee can be instituted, there has to be a revision to the current ordinance which may take four to six weeks.

There will also be public hearings to allow citizens to voice their opinion.

Bennett said that with the amount of time and money being spent on floodplain management, the county is not recouping any costs at all currently.

Even with the fee instituted, it will not cover all of the costs but it will help, according to Bennett.

According to numbers from Bennett presented in an April 12 Inter-Mountain article, if the commission had the .25 for residential and 1 percent for commercial in place since Jan. 1, 2017, it could have collected $70,569.50.

Cutright moved to begin the process of amending the ordinance to institute, seconded by Tenney.

The commission reviewed a request from Annabell Brown to use a FEMA lot for a vegetable garden and temporary horse enclosure.

Cutright said, “We’ve allowed residents in that area to plant vegetable gardens. The only thing I would want in the agreement is anytime they cease to be using the FEMA property that they remove the fences and put the property back into the same state as what it was before they started. The horse, I’m not on board with that.”

Nolte and Tenney both said they agreed with not allowing the horse to be on the FEMA lot.

“I would be OK with a vegetable garden,” Nolte said.

On motion by Cutright and second by Tenney, the motion passed unanimously to allow the vegetable garden with the clean-up stipulations should Brown stop using the lot for a garden.

The commission also agreed — on motion by Cutright and second by Tenney — to require clean-up of a property in the Warren Tax District for correction of any health and safety hazards, including but not limited to the removal and proper disposal of any debris, trash, junk vehicles and any environmental hazards.

Assistant county administrator Tabatha Perry said, “The West Virginia DEP is involved and has visited the site on several occasions,” she said.

Cutright said, “I don’t want to wait three months to see if there is any action being taken. I think three months would be plenty.”

Cutright moved, seconded by Tenney to approve the order and give a three-month deadline.

In other business, the commission:

∫ approved a request from Community Corrections to use James Lough as a security guard during parenting classes conducted in Lewis and Upshur Counties at the pay wage rate of $20 per hour, reimbursed in full by the W.Va. Supreme Court. The state requested a security guard be present. The hours will count towards the 1,039 hours Lough is allotted each year.

∫ approved Samantha Ribeiro Matos to teach Lewis and Upshur county parenting classes at the rate of $75 per class, reimbursed in full by the West Virginia Supreme Court.

∫ approved the appointment of John Barnes to fill an unexpired term on the Tennerton Public Service District Board effective immediately and expiring July 31, 2019.