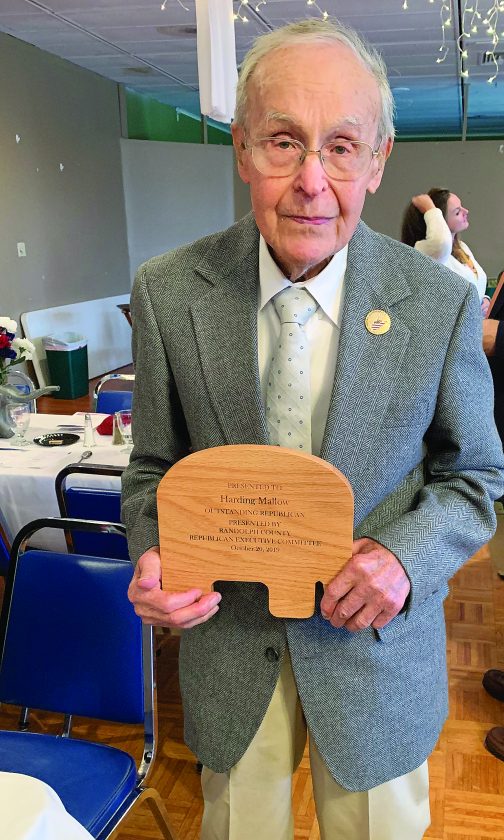 Hamilton went on to recount McCuskeys’ life and accomplishments, including the fact that he’s a lifelong West Virginian.

McCuskey then greeted the audience by saying, “If you want to know why we need term limits, there’s been 71 Supreme Court Justices and only 20 auditors.”

He then explained the tasks and responsibilities of the auditor’s office. It regulates and licenses state stockbrokers, as well as punishing those who break the law and steal money. State auditors also sell delinquent property, and the funds from property taxes go towards West Virginia public education.

“One of the really cool things that our office has done this year is, for the first time, we have GIS mapped all of the delinquent property in the state,” said McCuskey, meaning that individuals can find these properties online and see where they’re located.

McCuskey then talked about some of the challenges facing our state.

“We don’t have three and a half million people anymore,” said the auditor. He mentioned an unnamed county within the state that has a sheriff, but no deputies out on the streets, simply because the county can’t afford it.

The final topic McCuskey focused on was a new movement of transparency within the state government. Very recently, a website was created called the West Virginia Checkbook at transparencywv.gov. This site shows all who access it how money is spent in the state of West Virginia.

“If we buy a car on Tuesday, you’ll know which department bought it, how much they paid, and where they bought it from on Thursday,” said McCuskey. This fact makes West Virginia the number one most transparent state government in the United States, he said.

This transparency movement is intended to make citizens more comfortable with state spending as well as to locate areas where money is being wasted.

Other speakers at the dinner were Randolph County Commission President Mark Scott, Supreme Court Justice Tim Armstead, and Republican candidates including Woody Thrasher, running for governor, Riley Moore for state treasurer, and Ty Nestor for the House of Delegates.

The Inter-Mountain will publish an article later in the week detailing comments from the candidates who spoke at Sunday afternoon’s dinner, which took place at the Elks Club.