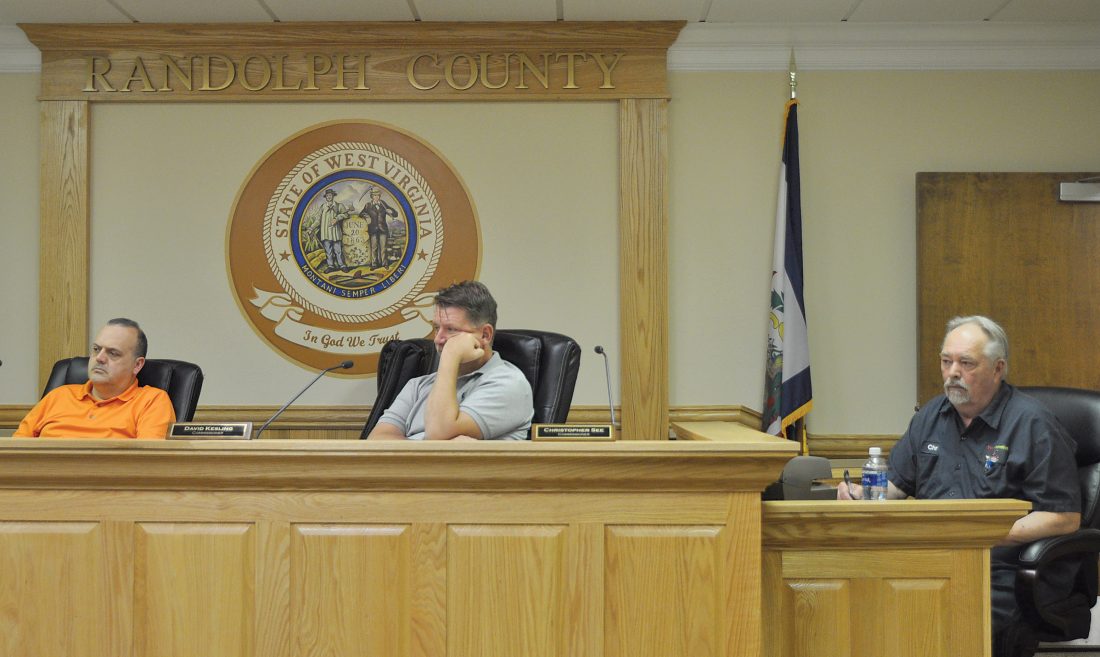 The Inter-Mountain photo by Haley Gordon Sitting farther away from each other than normal due to COVID-19 safety precautions are, from left, Randolph County Commissioners Mark Scott, David Kesling and Chris See during a meeting this week.

ELKINS — During a three-hour special-call meeting, Randolph County Commissioners evaluated bids placed by various accountants to choose the firm that will audit the Commission for the two most recent fiscal years.

Suttle and Stalnaker PLLC was the firm of certified public accountants who were chosen to perform the audit for fiscal years 2019 and 2020.

This firm, based out of Charleston, Parkersburg and Morgantown, is the same firm that audited Randolph County for the two previous fiscal years, 2017 and 2018.

“They have estimated 360 hours (of work) per (fiscal) year with a price of $43,000 per year,” said Lisa Daniels-Smith, a local certified public accountant and professor at Davis & Elkins College, a member of a committee advising the commission on the bid process. “That is a total of $86,000.”

“Suttle and Stalnaker PLLC has served governmental entities for over 45 years. No firm based in West Virginia has more governmental financial audit consulting accounting and compliance audit experience,” reads the submitted bid proposal. “Furthermore, we have a sincere interest in working with Randolph County.”

“We understand that the county requires a financial and compliant audit performance in accordance with governmental accounting standards issued by the Comptroller General and accounting standards generally accepted in the United States of America,” continues the proposal.

Suttle and Stalnaker will audit governmental funds including the E911 fund, component units such as the Randolph County Development Authority and various financial statements including scheduled expenditures and revenues.

“This committee would like to recommend to the County Commission that Suttle and Stalnaker be awarded contract for Fiscal Year 2019 and Fiscal Year 2020 based on the results of the state auditor’s bid scoresheet,” said Daniels-Smith.

Three other accounting firms placed bids on the contract to audit the Randolph County Commission.

Perry & Associates, Certified Public Accountants from Marietta, Ohio bid a total of $69,800 for 698 hours of work per fiscal year.

The final bid was placed by David L. Howell, a CPA who is a member of the American Institute of Certified Public Accountants.

Due to discrepancies within the proposal, Randolph County Commissioners voted to disqualify Howell’s bid.

The final vote for approval of Suttle and Stalnaker will pass before the Randolph County Commission at their regularly scheduled meeting on Thursday at 1:30 p.m.