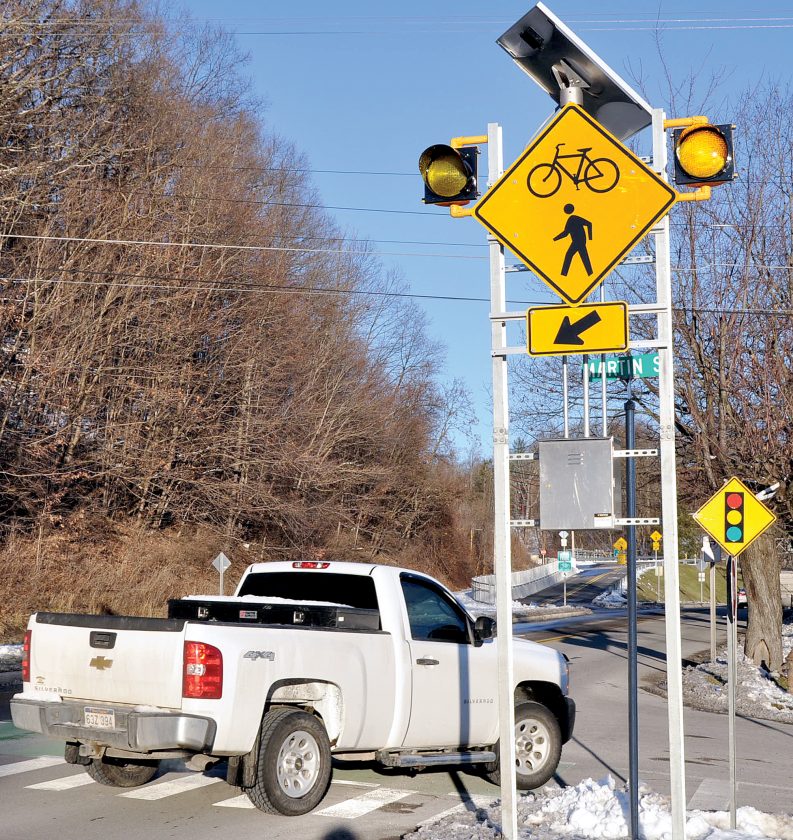 The Inter-Mountain photo by Haley Gordon Pictured are the new solar-powered, flashing yellow pedestrian lights on either side of the Elkins Rail Trail Connector crosswalk on Harrison Avenue and Eighth Street. This project began construction in summer of 2018 and is now considered officially completed.

The groundbreaking for the project took place in June 2018 and Robbie Morris, executive director of the RCDA, has been with the project since the beginning.

Morris said the project technically finished late in regards to the original contract award but, “most of the delays centered around material delivery.”

“The aluminum fencing from the vendor took what seemed like forever to get in, and then once it got in it wasn’t manufactured properly,” Morris said. “I think it was the hinges or hooks or something, they were on the wrong side so they then had to take them back and fix that.”

The connector project has created a safe pathway from the current end of the Allegheny Highlands Trail to the Elkins Depot Welcome Center in downtown Elkins. The Elkins Rail Trail Connector was placed in October 2018 at the trail head, located along U.S. 219.

“I do think J. F. Allen did a fantastic job with the construction,” Morris added. “It wasn’t really any delay on their part, they were very steadfast in their desire to get this project completed. It’s just that certain things happen in construction projects and they happened in this one.”

Despite the extended timeline, the project still ended up under budget, Morris said, noting some small “punch-list” items have yet to be completed, including some closing paperwork.

“It would be equivalent to if you were painting a room and you went through and said, ‘Oh, there needs to be a touch up here, a touch up there,’ that kind of stuff,” said Morris. “There’s a bunch of paperwork when you close out a project, so between our engineering firm, the DOH, the construction company and ourselves, we’re just preparing that paperwork and getting all of that stuff done to close it out.”

Morris and other project officials hope to have the paperwork finished by the end of January. A ribbon cutting ceremony will likely be scheduled for the spring.

The Rail Trail’s path into downtown now features small stop signs for pedestrians and cyclists ahead of the crosswalks.

“If you see a bike or pedestrians walking, then the traffic is to yield and stop for the people crossing the bike trail,” said Morris.

Also new are solar-powered, flashing yellow pedestrian signs facing either direction of the crossing on the corner of Harrison Avenue and Eighth Street.

“The Development Authority and local DOH had actually requested that push-button flashers be installed like at the courthouse crossing, but traffic engineering in Charleston denied that request,” Morris said. “I think we made the request two or three times to have push-button flashers instead of them being continually flashing.”